Trail evolves as a recreational and gathering spot along the Potomac River. 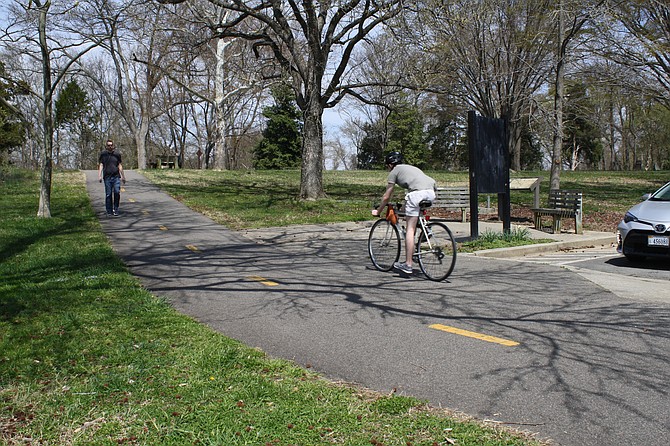 Mount Vernon Bike Trail has attracted many in the past 47 years. Photo by Mike Salmon.

On April 15, 1972, the world may have been preoccupied with Nixon, Vietnam and Apollo 8, but area bicyclists had the first stretch of the Mount 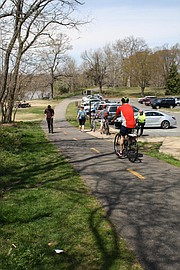 Hosted by the Friends of the Mount Vernon Trail

Vernon Bike Trail that would grow to become a valuable part of the area’s bike trail system.

According to the Friends of the Mount Vernon Bike Trail, the trail was the idea of Ellen Pickering and Barbara Lynch, two locals who tossed around the idea in early 1972, gathered signatures, reaching out to the National Park Service, and organizing volunteers to build the original 4.5 miles of trail between Belle Haven Park and Memorial Bridge. Before the trail, cyclists had to wait until Sunday when one lane of the parkway was bikes only — closed to cars. The popularity of this was evidence that a bike trail was needed.

The legacy of Pickering and Lynch lives on in the trail community.

“We're proud to continue in their spirit of making the trail a great place for all users,” said Erin Meter, a member of the Friends of the Mount Vernon Trail.

The following year, the trail gathered momentum and soon the National Park Service secured funding to extend the trail 7.5 miles to Mount Vernon, surfacing it with fly ash from Pepco in 1973. This section was 8-feet wide and cost $135,000, and the U.S. Army Engineers stepped in to build the boardwalks and bridges. A few years later, the trail was paved.

The trail grew from there, and is now an 18.5-mile trail from George Washington’s Mount Vernon to Key Bridge, with several east-west connections to the area trail network that is growing each year.

“It’s our connecting thread of the past, present and future,” said Supervisor Dan Storck, (D-Mount Vernon), who lives about a mile from the trail and uses in regularly with his whole family. “We have been walking, running and riding on it for 30 years,” he said. The trail goes over several creeks, some with Native American names after tribes that had once been in the area along the river. Dogue Creek for example was named after the Dogue Indian tribe, and the crossing at Dogue Creek is now being looked at for a trail connection on the southern end. Then there’s the colonial history at Mount Vernon Plantation, and soon to be more attractions such as the U.S. Army museum a mile or so from the end of the trail.

The Friends group has been around for years and puts together events where everyone can participate in maintaining the trail and surrounding picnic and wildlife areas. For example, on Martin Luther King Jr’s birthday in January, the Friends of the Mount Vernon Trail organized a trash clean up event despite the frigid temperatures, “Our group helps build community by offering trail users the opportunity to ‘give back’ to the trail they use and love, and help make the Mount Vernon Trail an ever greater place for people to walk, bike, and explore,” said Meter.