‘This Is Bold and a Great Opportunity’ in Fairfax City
Votes

‘This Is Bold and a Great Opportunity’ in Fairfax City 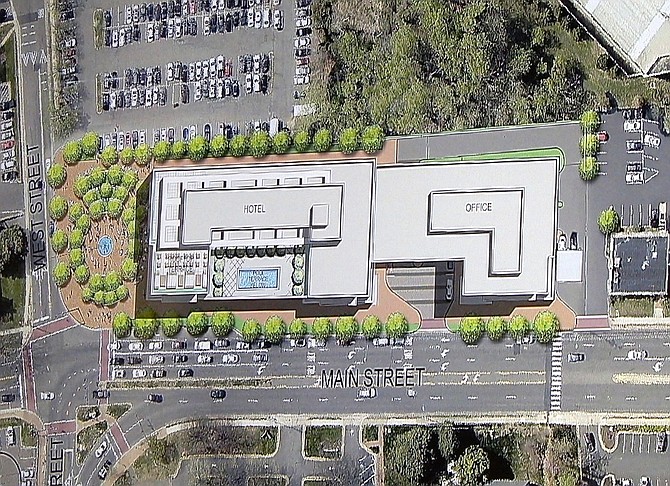 Conceptual site plan showing where the hotel and office building would go.

The hotel would be built along Main Street, near its intersection with North and West streets.

Currently, there are no hotels in Fairfax City’s Old Town area. But if a developer’s proposal comes to fruition, that could change in a big way.

It’s not yet known what brand of hotel would be built, but plans were revealed at last Tuesday’s (April 2) City Council work session. Speaking first was a City senior planner, Albert Frederick, who outlined the proposal submitted by the applicant, Ox Hill Realty.

The site is at the southwest corner of Main and West streets where two office buildings, a restaurant and bank currently stand. One office building would remain, but everything else would be replaced by a mixed-use building containing a hotel, performance center, game space, restaurants, retail and office use, about 100 residential units and a three-level, below-grade parking garage.

The hotel would have 140-160 rooms, plus a swimming pool, in a six- to seven-story building, and the parking garage would have approximately 479 parking spaces. The property consists of four land parcels in the City totaling some 2 acres, plus an undeveloped, Fairfax County-owned, 13,000-square-foot parcel – which is envisioned as becoming a landscaped plaza for pedestrians.

Representing the applicant, land-use attorney Lynne Strobel said, “This mix of uses would be a vibrant addition to the City.” But before the developer made his presentation, Council members asked City staff some questions about traffic.

“How would this affect traffic on Main Street?” asked Councilman Sang Yi. “It’s obvious, it will get more backed-up.”

“The applicant will have to study traffic management on Main Street and will have to talk with the county about traffic on its property, too,” replied Community Development Division Chief Jason Sutphin. “There are some potential options and some challenges, and we’re awaiting a full traffic study. We’ll also see if the number of access points are adequate for this site.”

IN RESPONSE to another question from Yi, Sutphin said the performance area would require its own parking. Furthermore, said Public Works Director David Summers, “Our traffic engineer, Curt McCullough, will study the traffic there, as will the city engineer and [Transportation Director] Wendy Sanford, and we’ll make several comments. I think this project would be a valuable, economic boon to our area, but we need more information about the traffic impacts.”

“We could also look at whether we have the right traffic patterns at North and Main streets, seeing how traffic backs up there now,” said Councilman Michael DeMarco. “This is bold and a great opportunity for us, but we need to think about it in the larger context of the Old Town area.”

Then Chris Smith of Ox Hill Realty addressed the Council. “We looked at seeing if there’s a better use for this property,” he said. “It’s a gateway to Old Town, from the west. We asked City staff what the City wants there, and we worked with [Economic Development Director] Chris Bruno and the county – which is working on a Master Plan there.”

Smith said they designed the property to extend Page Avenue through it, and he said staff told him a hotel would be good at the proposed site. “This is an old town,” said Smith. “And [historically] in old towns, the hotel was always the biggest building.”

Yet, he’s also looking toward the future and potentially partnering with GMU regarding its MGTA program which enables students to develop new skills and knowledge in game design and programming. “GMU has a gaming-technology area, and its MGTA brings it to high-school and middle-school children,” said Smith. “They could come in, in the evenings and on weekends, and have gaming classes [at our new facility].”

In addition, he said, “The performance-arts theater would allow GMU to have performances there. Plus, international and local school performances could be there, too, in a cool environment.”

Smith said one restaurant would be on the hotel’s first floor, opening to the plaza. “The county supports this, and it creates an open area connecting to the farmers market,” he said. “The other restaurant would be a rooftop one with indoor and outdoor seating, with fire pits, looking over the old courthouse. Plus the public space/park would connect the west side to the east side.”

FAIK TUGBERK, architect and principal with Architects Collaborative, presented further details. “We’re excited to be here and share our vision with you,” he said. “Altogether, this is about 270,000 square feet above grade. The uses are still in flux, but the hotel is the driving force and will set a precedent for other developers.”

He said the plan is to fit in and be complementary with the surroundings. “This will be lively on the street level, with people uses on the hotel’s first floor – the lobby, fitness area, possible retail, etc.,” said Tugberk. “This is a city in flux, and we can help you make that transition.”

Noting a lack of green, civic space there, he said the area to the left of the hotel could become that space because of the plaza. Calling it a “pedestrian plaza,” Tugberk said it would have seating and lights and could be a place for people to sit and have a sandwich or meet with friends. And the restaurant opening onto it would be 6,000 or 7,000 square feet and would be at the corner of West Street and that plaza.

“We’re going to reduce the four curb cuts [onto the property] to two, and the main entry point would be as far from the [Main/West] streets intersection as possible,” said Tugberk. “Wells Fargo Bank is there now and wants to stay. The hotel will have classic architecture, emulating the courthouse, and would look like three buildings from the street.”

He said the hotel, conference room, ballroom, etc., plus restaurants, would comprise 180,000 square feet above ground. The office/retail building to its right is 100,000 square feet. “Our study said the City could accommodate [this size] hotel,” added Smith. “And it would be one that would serve people coming to events [both] here and at GMU.”