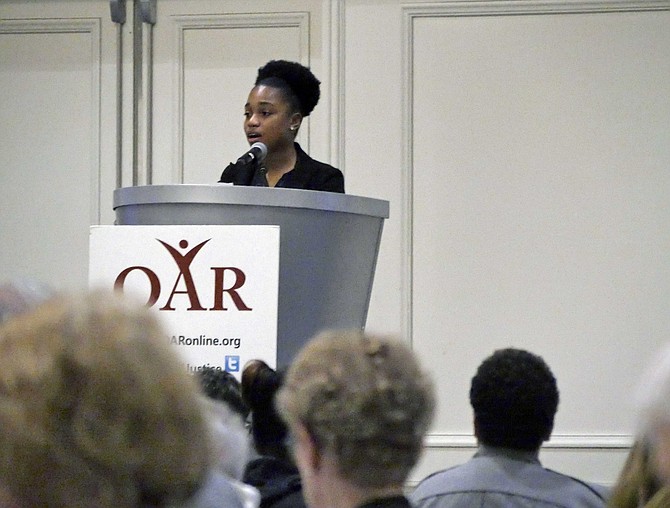 Tiana Woods tells her story of desperation facing eviction with a young child and a husband in prison: "I'd never experienced something like this." Now after assistance from OAR, her husband has been helped with getting a job after release from jail, her rent is caught up, and she is working as well. "Things have gotten better." She says OAR treated her with respect and helped "when we had no place else to turn." Photo by Shirley Ruhe.

The Alexandria Police Department shows up in full force at the OAR 11th annual Second Chance fundraising breakfast on April 9 at the Crystal Gateway Marriott.

Hundreds of attendees turned out as Offender Aid and Restoration of Arlington, Falls Church and Alexandria held its 11th annual Second Chance Fundraising Breakfast April 9 at the Crystal Gateway Marriott. The event featured the journeys of reentry into the community by several formerly incarcerated clients.

OAR assisted 2,014 participants in their program in 2018, including 635 men and women who received reentry assistance, both pre- and post-release, and 1,432 men, women, boys and girls who were enrolled in the Community Service program, which is an alternative form of sentencing.

In addition, this was the third year of a new Intensive Reentry Program, which focuses on individuals still in incarceration to provide classes in essential life skills as well as case management and employment coaching. Individuals in this program have a recidivism rate of 14 percent compared to 54 percent for a comparable population nationally.