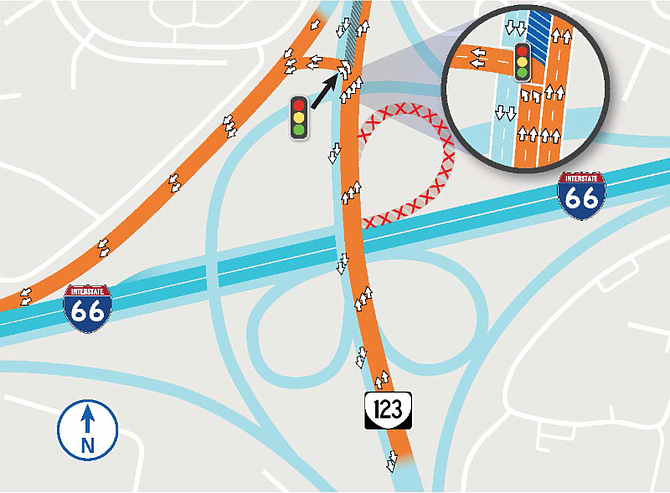 Traffic pattern changes at the I-66/Route 123 interchange beginning on or about April 19, 2019. Drivers traveling north on Route 123 will access I-66 West by turning left at a traffic light and joining the ramp from southbound Route 123 to I-66 West.

A new traffic pattern will be implemented on or about April 19 at the Route 123 Chain Bridge Road/I-66 interchange, including closing the ramp from Route 123 North to I-66 West and installing new, temporary traffic signals to allow these drivers to access I-66 West. Changes are part of the Transform 66 Outside the Beltway project, which is reconstructing the Route 123 interchange to add direct access to the future I-66 Express Lanes as well as improve traffic flow and safety. This new, temporary traffic pattern will remain in place for approximately two years while a new bridge and ramps are constructed.

Drivers should expect construction-related detours and additional changes to traffic patterns as work progresses at the interchange. Drivers are reminded to use caution and pay attention to lane markings and roadway signs in construction work zones.

Learn more about the project and sign up for project updates and lane closure alerts at Transform66.org.