It's a Dirty Job in Reston
Votes

It's a Dirty Job in Reston 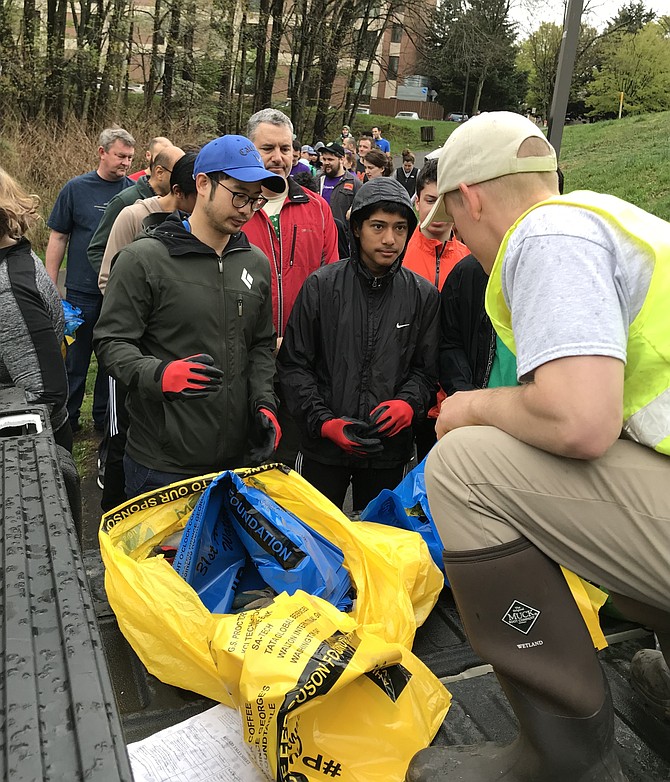 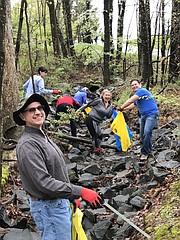 It's a dirty job, but RA volunteers leap in to help clean up Snakeden Stream Branch behind Hunters Woods Plaza during the 31st Annual Potomac River Watershed Cleanup.

For some, it meant cautiously wading into Snakeden Stream that flowed behind Hunters Woods Village Center and reaching into the water to pull out cans. "Why's it called Snakeden Branch Stream?" called out a volunteer.

For others, it meant sloshing through Colvin Run's shoreline and untangling plastic grocery bags that clung to branches.

And for a most diligent group of Reston Association (RA) volunteers, it meant bending over 724 times and picking up a reported 724 cigarette butts.

ON SATURDAY, APRIL 13, 167 Reston Association volunteers participated in the regionwide 31st Annual Potomac River Watershed Cleanup coordinated by the Alice Ferguson Foundation. The cleanup event spanned Virginia, Maryland, the District of Columbia, West Virginia, and Pennsylvania "The Cleanup provides a transforming experience that engages residents and community leaders and generates momentum for change," stated the Alice Ferguson Foundation for a trash-free Potomac Watershed Initiative. The Potomac Watershed is all the land area that drains into the Potomac River.

It was a dirty job, but somebody had to do it. Nicki Bellezza, watershed protection specialist for Fairfax Water, addressed the crowd of approximately 75 volunteers assembled near the banks of Snakeden Branch Stream in Reston. "Any little part we do has a big impact," Bellezza said. She described how Snakeden Branch Stream and Colvin Run, another RA cleanup site, flow through Reston. Both streams connect with the Difficult Run Stream which eventually flows into the Potomac River and that in turn flows into the Chesapeake Bay, Bellezza said. People in Reston and the surrounding communities get their drinking water from the Potomac River.

"Litter has a huge impact to our streams, the Potomac, and eventually the Chesapeake Bay. It impacts wildlife, the recreational use of the watershed, and pollutes the streams. Wildlife can get tangled up and die in certain types of litter or could get sick from eating it. Contaminants that might be in containers can pollute the streams. And any amount of trash can decrease the enjoyment one gets out of using a recreational area adjacent to a stream," stated an RA spokesperson.

"We are here to do good for our community," said Patti Menders of Athleta in Reston Town Center. She brought along three others to help out, Kristina Clarins, Leslie Hettinger, Patti Menders and Ryan McCarthy, 14.

Volunteer Hrithik Kumar, 16, of Boy Scout Troop #159 of Herndon, said, "I signed up a week ago. I'm not a morning person, and I dragged myself out of bed to do this."

ORGANIZERS asked the volunteers to keep track of the number of plastic bags and cigarette butts if possible. On Monday, April 15, RA reported that in three hours, "For the five sites we had in Reston, we had approximately 130 bags of trash, 25 bags of recyclables, and 167 volunteers. In addition, over 724 cigarette butts and over 257 plastic grocery bags were collected as part of the cleanup."