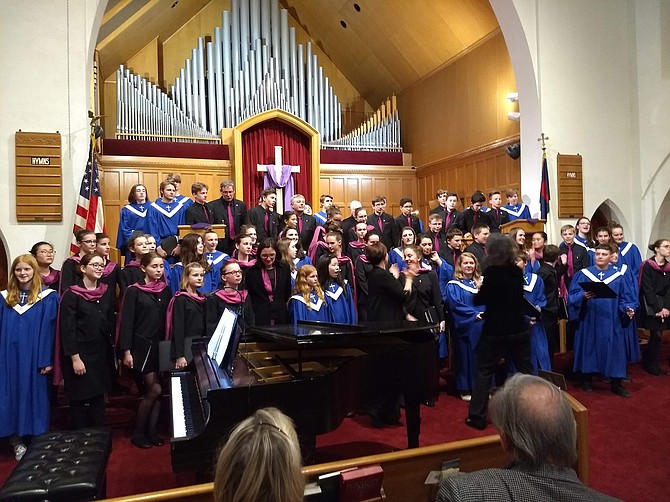 “C’était magnifique!” (It was magnificent) was the reaction of Anne-Marie Daris to the concert held at the United Methodist Church In Clarendon on April 10.

The French choir, La Maîtrise de Reims, is on a three-week east coast tour with 48 of their choristers. Their trip culminated with four days spent in Arlington, a sister city of Reims, France. The Clarendon United Methodist Church Youth Choir was their host and joined them on three songs for this final performance of their tour, one by French composer Henric, “Above All”, one by American A. Parker, “Hark I hear the Harps Eternal”, and one by Faure, “Cantique de Jean Racine.” The French choir also honored their American hosts by singing three American songs, including a Leonard Bernstein song from Westside Story.

They began with a traditional Gregorian chant, Pueri hebraeorum, harking back to the choir’s beginnings in the 13th century. They sang a traditional repertoire of Franck, Handel, Mozart, Faure, and Purcell, but also added several songs written by a young French composer, Marc Henric, who is only 32, including the “Magnificat de la Paix”, written in 2016 to commemorate the 100th anniversary of WWI.

La Maîtrise de Reims Cathedral was founded in 1285, making it one of the longest-established musical foundations in France. The whole choir comprises 220 boys and girls aged between 7 and 15. The choristers attend the Notre-Dame School of Reims. They rehearse and train after school between 6 and 10 hours a week depending on their age and level, and they also have weekly theory classes. Choristers sing regularly at Cathedral services and for special occasions. They are also involved in special events which take place in the Cathedral or in the city, make recordings and concert appearances on a regular basis, and also travel in Europe.

Sandrine Lebec, music director and conductor, who conducted the choir, has been training boys and girls for nearly two decades. In 2001, she became the first woman to conduct the Choir of Reims Cathedral.