Sharpshooters employed by the Department of Agriculture culled 22 deer on the Gold Mine Loop area in March. 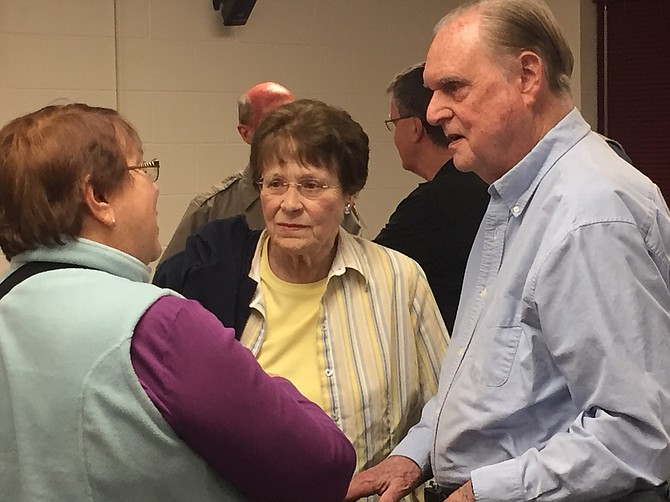 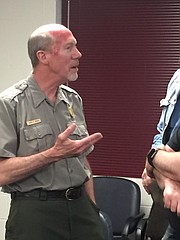 Kevin Brandt, superintendent of the C&O Canal National Historical Park, spoke to the West Montgomery meeting about many issues, including the impact of so much rain on the park.

West Montgomery members are known for being outspoken.“You all have never been shy about expressing yourself,” said C&O Canal National Historical Park Superintendent Kevin Brandt.

Brandt spoke to more than 40 people at West Montgomery County Citizens Associations meeting at the Potomac Community Center on Wednesday, April 10, 2019. Brandt gave an update on the state of the 184-mile park that runs adjacent to the Potomac River, and that many in this community consider part of their back yards.

“You’re such important stakeholders with what happens in the park,” he said, “and your efforts is what will protect this resource for the next generations of users.”

TWO THINGS made the current status of the park different than most years. One, the never-ending volume of rain we have received week in and week out, including several floods, increasing the need — and cost — for repairs and maintenance up and down the towpath. Brandt said visitation was down about 10 percent over the past year, mostly due to rainy weather, with an associated decrease in revenues.

Although rainy weather decreased visitation, it increased costs and labor. Many areas of the towpath were washed out with recent floods.

Second, every aspect of work in and about the park continues to be weeks or months behind because of the federal government shutdown at the beginning of the year. Everything from major construction projects to recruiting summer interns is behind schedule.

”The shutdown affected all our construction projects. All work came to a halt and that’s all had a ripple effect.”

THE PUBLIC will get to see the five-year Strategic Plan for C&O Canal National Historical Park later this spring.

“Making sure the park’s goals and the community goals are in alignment, it’s going to take a lot of dialogue,” said Brandt.

Towpath continuity takes the top priority, as does safety. “Our first concern is your safety, there’s nothing more important than that,” Brandt said.

The Park now has just four full-time maintenance employees to cover the 184.5 miles from Lock One in Georgetown to Cumberland.

“One of the strengths of this park are its patrons and its volunteers. Without these organizations, the park would be a much lesser place,” said Brandt.

The budget for the park has been flat for several years, “but in terms of real dollars of what the park can purchase and do has gone down.”

The park receives a significant portion of the admission fees too, so having the number of visitors drop by 10 percent doesn’t help the budget.

Great Falls, Georgetown and Williamsport have always been top spots for interpretive services. Staff is also discussing ways to decrease the wait time to enter the park. On the Virginia side of Great Falls National Historical Park, some patrons wait for an hour on a sunny day. Annual passes and senior passes help move the lines, Brandt said.

DEER ARE DECIMATING the forest understory and devouring saplings in the Gold Mine Loop (and many other) area of the park, said Peggy Dennis, who asked whether there was any plan to take action about the number of deer.

“There is no understory,” Dennis said, adding that the deer eat all the saplings too, so trees lost to age, disease and weather don’t have replacements growing up. The high number of deer is also destroying smaller trees and shrubs that provide critical habitat for native birds and other wildlife.

Tha parks service has hired sharpshooters to cull the deer herd in the Gold Mine Loop area, and several other areas, only during the month of March.

Sharpshooters employed by the Department of Agriculture killed 22 deer on the Gold Mine Loop in March, said Brandt. Estimates were that there were 33 deer too many, but federal restrictions prevented the program continuing past March. The program is expected to continue next year. All the deer are checked for chronic wasting disease.

A MAJOR PROJECT to repair watered structures from locks 5-22 is ongoing from Swains Lock (MP 16.9 Breach), around the Great Falls Tavern (Level #20 and Lock #19), Olmsted Island (Lock #18 and Lock #17), Carderock (Culvert #15), Lock #10 (Rock Run Culvert) and Level #7. During the construction, visitors will be directed to follow local detours around the work areas.

Other items in the free-ranging update: