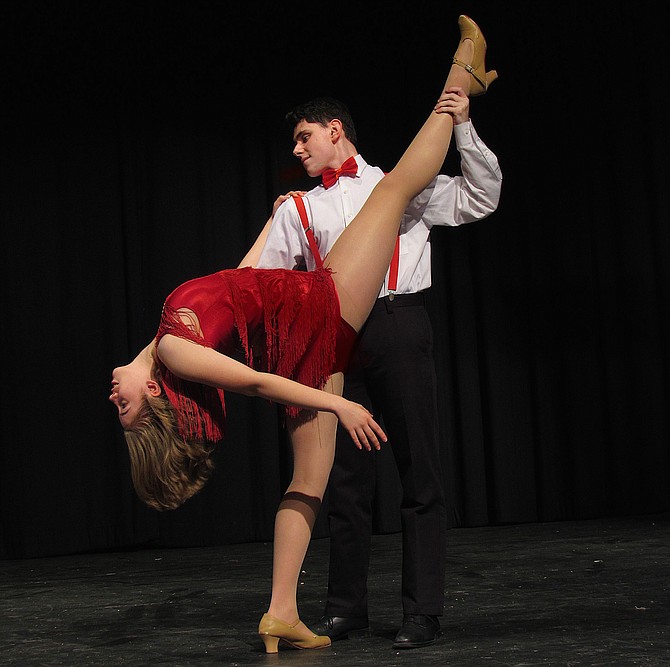 “The characters really come to life,” said Director Terri Hobson. “It’s a funny, relatable, foot-tapping and enjoyable show, reminiscent of classic, American musicals. The audience will see the actors having fun, so they will too – it’s contagious.”

There’s a 20-piece pit band conducted by Woodson alumni Bao Vo, now a teacher, and the music director is Woodson Choral Director Amy Moir. “Things are going great and the cast is amazing,” said Hobson. “We have both experienced and novice dancers, and several learned tap just for this show.”

Set in 1922, the story is about a woman named Millie who moves to New York, aiming to marry a rich man. Portraying her is junior Hannah Black. “She’s independent and strong-willed,” said Black. “She’s also bold, sassy, sarcastic and not afraid to speak her mind.”

At first, said Black, Millie is “emotionally closed-off; but she eventually becomes more open. She came from Salina, Kansas, and plans to find a rich man to marry. So she wants to get a job and marry her boss. I love playing her. It’s a dance-heavy musical, which I love, since I’ve done all types of dances with the Virginia Ballet Co. for the past 12 years. And since Millie’s so outgoing, I can tap into her fiery spirit – and whenever I do, it’s an adventure.”

BLACK’S FAVORITE SONG is “Forget about the Boy,” her solo with the ensemble and a big, tap number. “It has a lot of energy, and Millie gets so angry and full of passion,” she said. “She and the female ensemble are ranting about how they hate men, so they all bond together.”

She said this show has many layers. “It’s full of comedy, but the audience will also get invested in the characters and their lives,” said Black. “And there are lots of plot twists they won’t see coming. We’re also excited about our set, and our cast is just phenomenal – especially Sara Willcox, who plays [evil] Mrs. Meers, who runs The Hotel Priscilla for actresses. Because Sara’s so good, she really makes you enjoy hating her.”

Black also choreographed all 13 of this show’s dances. “It was tough finding time to choreograph, between school, play rehearsals and dance classes,” she said. “But the cast worked really hard and did an amazing job learning all the moves. I love watching the big, ensemble numbers looking so good; and seeing the end product makes me proud of the entire cast.”

Sophomore Dylan Dipasupil plays Bun Foo, one of Meers’s henchmen. Meers takes in actresses without families, but then drugs them and sells them into white slavery in Hong Kong. “Bun Foo is only helping her so he can make money to bring his mother over from Hong Kong,” said Dipasupil. “He’s hardworking and goal-oriented, unlike his brother, who falls in love with one of the girls.”

He said his character is also headstrong, but compassionate. In fact, he said, “In a song Bun Foo and his brother [played by Gin Choi] sing, called ‘Not for the Life of Me,’ we talk about how there can be more to life than what we’re doing. It’s interesting playing someone who did bad things with good intentions, and he eventually stands up to Meers.”

Dipasupil said the show has “positive messages about life and how people can change for the better. The dances and music are very energetic, and people will enjoy that upbeat style. It also gives people insight into the 1920s time period through the costumes, as well.”

Portraying Rita, an actress living at the hotel, is freshman Hannah Fidler. “She’s a friend of Millie’s and is lighthearted, ditzy, fun and friendly,” said Fidler. “I like playing ditzy characters because I can add little quirks to her that set her apart from the other actresses there.”

Her favorite song is “Falling in Love with Someone,” because “The two people singing it are really good vocalists and I like their harmonies,” said Fidler. “And their dance is fun to watch because it has lots of flips, lifts and tricks.”

She said the audience will enjoy following the storyline and seeing how everything turns out. “The singers are very talented,” she added. “And they’ll especially love the dancing because Hannah Black is an amazing choreographer.”

Senior Kelly Ward is the stage manager and set designer. Scenes take place in a speakeasy, a jail and the Hotel Priscilla. “We installed four, track walls that are movable and can be rotated,” said Ward. “It enables us to have a variety of different backgrounds for the various scenes. And at one point, three of them are used at once. Two show the sides of buildings on a city street, and the one between them is ostensibly a movie poster of a man’s torso. But when the actors push on his tie and tie clip, the whole wall opens and lets them into the secret entrance of the speakeasy.”

THERE’S ALSO A HALLWAY UNIT that does double duty. One side has three doors that open to the hotel rooms. But on the other side of it is the jail, also with working doors, and Ward is pleased with how this turned out, too.

As stage manager, Ward cues all the sound effects, lighting changes, projections and set changes. “We currently have over 100 set changes – which is significantly more than we’ve ever done,” she said. “We also have about 70 projection cues for the videos and pictures projected on a background during the scenes.”

For example, mugshots will be projected to look like they’re on a jail wall. And as the policeman takes someone’s photo, the audience will see and hear the camera flash and then see the mugshot projected. “All these actions involve three cues done at once – and that happens 10 times, because 10 photos are taken,” said Ward. “Being a stage manager is acting through the sound, projections, lighting and set.”

Overall, she said, “This show is impressive. Forty people rehearsed their dancing, singing and acting while sets were built, lights were focused and costumes were sewn. Yet when we bring everything together, it’s so cohesive, it seems like they were never separate.”