The Other Alexandria: Making His Ancestors Proud
Votes

The Other Alexandria: Making His Ancestors Proud 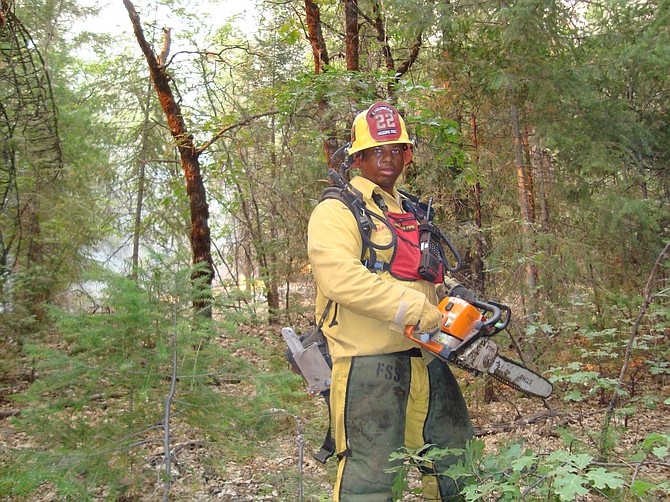 Some of the biggest fires that the United States has seen have been in California. One man with deep roots in Alexandria, Reuben Anthony Burton, has been fighting these fires in California for almost 20 years. He has been involved in structure fires, medical aids, rescues of all types, vehicle accidents and fires, and all fire calls that were dispatched to his fire department in California. He has fought fires all over California, and up to the Oregon border and Nevada. Every summer for 18 years, Burton has fought large fires that were 1,000 acres or more.

While he and his fellow firefighters were fighting the Darby Fire in Arnold, Calif., the 9-11 attack took place in New York City and at the Pentagon. As a result of the 9-11 attack, all air support was suspended for a short time in the United States that restricted firefighters to tackle fires on the ground only.

Since 2001, fire departments have had a stair-climb to replicate the number of steps firefighters would have had to take to get to the top of the Twin Towers in New York. Burton climbed stairs in the Renaissance Towers Building in Sacramento, Calif. to honor those fallen firefighters. Other fires that he was involved in that had large properties and life losses were: the 2003 Cedar Fire in San Diego, Calif. that involved 273,246 acres, destroyed 2,820 structures and killed 15 people, and the 2015 Valley Fire in Middletown, Calif. which destroyed 1,955 structures and killed four people.

Burton knew he wanted to be a firefighter as early as 6 years old. He would tell his mother, Frances Burton, that when he grew up he would become a firefighter. He began his fire career as an intern in 1998; a full-time firefighter in 2000 for California Department of Forestry and Fire Protection; a fire Apparatus Engineer in 2005 for Nevada County; and a fire prevention officer in 2018. Recently, Burton accepted a position as a Fire Inspector I/Peace Officer for the Cosumnes Community Services Fire Department in Elk Grove, Calif.

Burton was born to Reuben Arnold Burton and Frances Norton Burton on July 26, 1975 in Sacramento, Calif. He graduated from Columbia Southern University in Alabama with degrees in Fire Science and Occupational Safety and Health. He is the only child of his mother, Frances Elizabeth Norton-Burton. He is a great fan of the Washington Redskins. His mother is a native Alexandrian, and the daughter of Arthur Norton and Mamie Carter. Norton-Burton’s family has been in Alexandria since the Civil War. Like generations of his family, Burton was christened at the family church in Alexandria. He and his mother are descendants of the Robinson and Norton families whose members are buried in the Alexandria Freedmen’s Cemetery. His ancestors fought and died to have a chance to be part of the American dream and for his life’s dream to help others. When you hear about a fire in California know that one of our own has been out there fighting and saving lives.