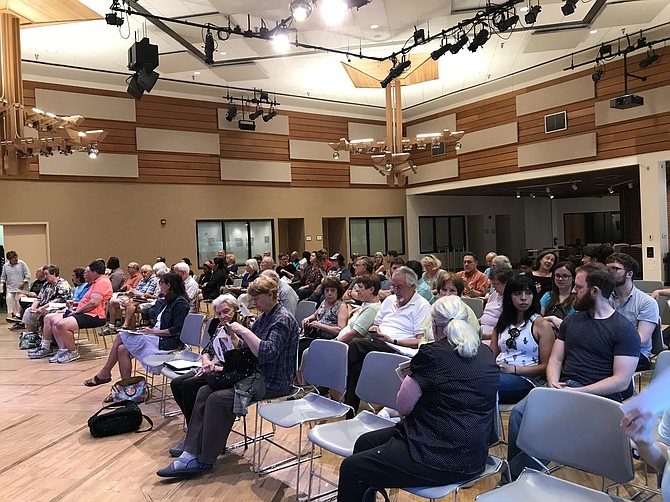 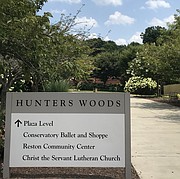 Resident Melanie Meren said, "Providing an opportunity for residents to ask questions, voice concerns, and share ideas with county police and leaders encourages the kind of community that's cultivated daily in Reston and Hunter Mill. We all want to live without gun violence and the tragic loss of life."

SUPERVISOR HUDGINS opened the community meeting describing the murder of Mejia as a "horrific." "I appreciate your support," said Hudgins.

Lieutenant Michael A. Shamblin of the Fairfax County Police Department provided an update on the investigation. Officers arrived a little before 1:45 that morning after at least three different residents called and reported gunfire. Officers began searching the area and walked the paths, eventually locating Mejia deceased.

According to Shamblin, detectives from the Fairfax County Police Department’s Major Crimes Division processed the scene for the better part of three days. They found, he believed, 29 shell casings from "a couple of different firearms.” He said that since that time, the department conducted hundreds of interviews and processed hundreds of pieces of forensic evidence.

"It's a slow, methodical process," Shamblin said. He stressed while there were no witnesses to the murder "to point them in the right direction,” they were getting closer every day. Shamblin emphasized, "It's a priority for the Major Crimes Bureau.

"If you know anything or think you know anything, please call and talk to a detective,” Shamblin urged attendees. He added that the caller could remain anonymous. "The information you have may be what turns this case and breaks it for us. We need the public's help," he said.

Asked by an audience member if the murder could be a gang initiation, Shamblin responded, "We have not seen gang initiated killings in Reston." Another person asked about behavior seen in the area such as drinking and loitering, which might be related to the murder and asked what Reston District Station was doing.

Lieutenant Karen Maslona, Assistant Commander Reston District Station of the Fairfax County Police Department answered that before the murder, its Neighborhood Patrol unit had already set up a plan to provide walking and bike patrols, both in uniform and plainclothes. "They were working this night, but this happened after they left for the evening," she said. According to Lt. Maslona, since the incident, the station extended its patrol unit until 2 in the morning.

Asked if the death was gang-related, Shamblin stated he could not answer definitively. "It's still an avenue of investigation we are looking at," he said. However, Shamblin added that to their knowledge, the victim was not a gang member.

Asked how many weapons and what kinds, Shamblin stated that there were at least two different firearms fired, "two different calibers," but did not believe either was an automatic weapon.

Multiple citizens questioned the presence of people living under the bridges and an encampment behind the Lutheran Church. Maslona stated they were residents of Reston coming and going and confirmed there was no encampment anymore behind Christ the Servant Lutheran Church.

Private First Class Katy Defoe, Crime Prevention Officer Reston District Station clarified Reston Association (RA) owned the trails, and there was no way for the police to enforce a curfew on a property that doesn't belong to the state. She stressed that trail curfew was a question for RA, and although the trails were private property, they were open for the public to use. "When we stop and identify people, we discover they have Reston addresses, which means they are using the property just like everybody else in Reston has the ability and right to use that property."

Leila Gordon, Executive Director of Reston Community Center since 1983 and representative for Hunters Woods Neighborhood Coalition attempted to dispel the public's perception of Hunters Woods as unsafe from both a personal viewpoint and data-driven viewpoint. "I have worked here all hours, day and night...I never had a situation that felt dangerous to me in all those years... I can count on one hand the number of incidents that have involved an attack on another human being in this area in all those years… From a factual basis, a data basis, Hunters Woods like Reston, is one of the safest places you can possibly be. Reston has the enviable status as they pointed out earlier as having the lowest number of crime incidences of any district station in Fairfax County... a very safe county," she said.

GORDON said ten years ago Reston Association, Reston Community Center, Fairfax County Police Department, Cornerstones, Christ the Servant Lutheran Church and the property owner Edens formed HWNC. According to Gordon, all of them got together because of concern about the public's perception and fear observing folks who congregate, hang out together, and who may have been drinking or not, some without fixed addresses at that time.

Gordon shared three strategies HWNC developed to decrease the level of fear. "(First), you can walk without looking at a phone or talking on a phone, and with a friend. Two is that if you have a vehicle, and you park it here, you should lock it. ... The third thing you can do is, as said earlier this evening, if something is wrong when you feel it in your gut, you see it, you feel it, call. That's when you should use your phone if something is wrong that makes you feel threatened, unsafe. … Call 911.”

Anyone with information is asked to contact the Major Crimes Bureau at 703-246-7800. Tips can also be submitted anonymously through Crime Solvers by visiting www.fairfaxcountysolvers.orgor calling 1-866-411-TIPS (8477). They can also be sent by texting, “TIP187 plus the message to CRIMES (274637).