Nine presidential assassins inspire each other to pull the trigger in this musical. 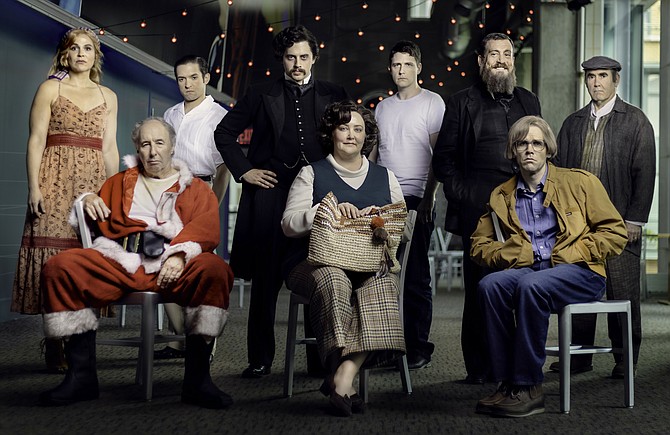 The cast of Signature Theatre’s “Assassins,” which runs now through Sept. 29. Photo contributed

To kick off its 30th anniversary season, Signature Theatre in Arlington is presenting its 30th Sondheim musical, “Assassins,” from now through Sept. 29. From John Wilkes Booth to Lee Harvey Oswald, nine would-be and successful presidential assassins inspire each other to pull the trigger and change their worlds in a perverse and entertaining vaudeville show.

According to Artistic Director Eric Schaeffer, “Every year, we produce a Sondheim musical as part of our season. We felt it was time to bring this show back to Signature to celebrate 30 years of Sondheim musicals. It just felt like the right time to be producing this show in this city at this time.”

He added: “I think the hardest thing about the show in today’s world as a director was being sensitive to how guns are used in the show. The show originally premiered off-Broadway in 1990 and the world has changed so much since then. The other difficult thing was just finding the right cast. It has nine great character parts that are all unique. Finding the actors to fit those molds was very important in bringing their stories to life and I think we have the perfect cast doing it. I couldn’t be happier.”

As far as audience takeaways, he added: “I think every audience member will have a different reaction to this musical. Having directed it 27 years ago, it’s amazing how it resonates with you in a whole different way with what our country is currently going through. You hear lyrics sung like ‘The country is not what it was…’ and it sends a reaction. I think audiences are in for an exciting night of theater full of laughs, tears and giving them plenty to think and talk about. That’s what great theater does.”

Actor Ian McEuen plays the role of Giuseppe Zangara, who was the Italian immigrant who attempted to assassinate Franklin Delano Roosevelt; he missed him and fatally wounded Mayor Anton Cermak of Chicago. “He endured constant, intense abdominal pain from the age of 6, which he blamed on those in power and capitalism in general. He did not identify with any political belief system, believing only that all money in the world should be consumed by fire and that all capitalists should die,” he said.

As far as challenges, he said: “Zangara, vocally speaking, is one of the highest roles Sondheim has written for a male. My biggest challenge has been to find a balance between singing this high-flying role healthfully and conveying the all-consuming rage of the character. It was also a challenge to physicalize the intense abdominal pain that Zangara went through constantly, without making it over-the-top.”

He added: “While the show, on the whole, is an examination of the myriad reasons why someone would be driven to make an attempt on the life of the president, in this day and age, with the prevalence of gun violence in this country, there is something much more immediate to be gleaned from the story. Whatever pain, trouble, or hardship you are facing in your life, violence will never be the answer.”

The show is directed by Eric Schaeffer with musical direction by John Kalbfleisch, and includes a cast of Signature favorites such as Nova Y. Payton, Tracy Lynn Olivera, Evan Casey, Bobby Smith and others.