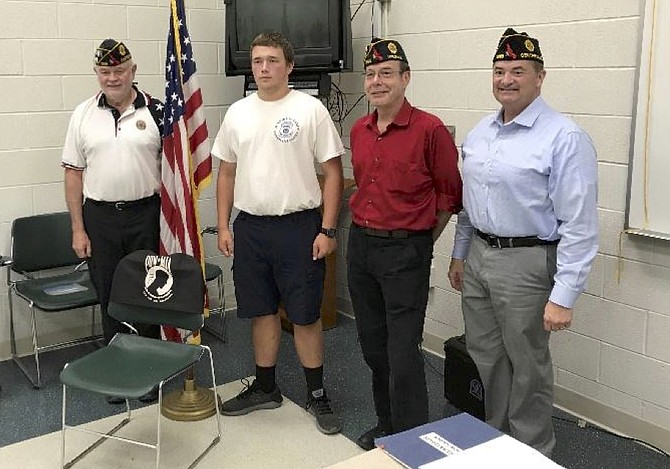 The 30th Session of the Virginia Youth Cadet Law Enforcement (VYCLE) Academy was completed with the graduation of 46 cadets in June. Local student Russell Desrosier of Chantilly High School attended the program. The cadets experienced a culture shock on the preceding Sunday when they reported with their parents for a week of adventure. They were told by American Legion counselors that they should say their good-byes before they entered the hallowed grounds of the Virginia State Police Training Academy.

After check-in, the Troopers took control of the cadets, made sure there was no contraband in their luggage and immediately began the teaching process of moving quickly and replying with “yes sir,” “yes ma’am” and so forth. Parents gathered in a separate classroom where the Virginia State Police (VSP) training coordinator, Sgt. Mike Tudor and American Legion Director Bill Feasenmyer gave the parents an overview of what their child was about to experience the next week. Contact information for both was given and parents quickly took photos of the phone numbers shown as they were told their children would not have access to their own cell phones. That privilege would be earned. Some parents cried, some laughed at what they were hearing, but they were assured that they were in the safest hands possible for the next five-and-a-half days and not to worry. They were also assured that at Friday’s graduation, they would be astonished at what these 17-year-olds would accomplish.

The intensive week includes military-style drill, physical training, crime scene investigation, defensive tactics, driving a VSP cruiser, firing the VSP handgun and patrol rifle, simulated shoot or don’t shoot decision making, water safety, DUI simulation, more military drill and physical training. The cadets visited the Governor’s mansion, the Virginia War Memorial, and were treated to a cookout at Post 186 in Midlothian. Of the 50 young men and women who started the program 46 marched into the gym for graduation. Phones and cameras of parents taking photos as fast as possible focused on the precision marching, cadence, sharp turns, etc. that they had learned in just five days.

Post 1995 Centreville sponsored Desrosier’s participation in this year’s academy. He was a guest at the Post’s August monthly meeting, where he provided a report on his academy experience. He got a warm welcome and a round of applause for having completed the program.