Amazon and Project Journey are underway in Arlington. 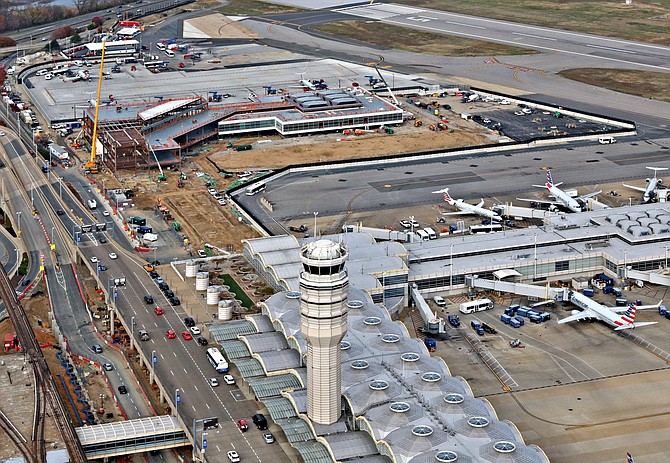 Project Journey is about half way complete at Reagan National.

With the introduction of Amazon and “Project Journey,” the Reagan National Airport expansion project, change is in store for the Crystal City of old. The wheels are in motion now, covering everything from an expanded bicycle network, new walkways, roads and a new commuter terminal at the airport to handle the growth.

According to the Arlington Community Coalition, Northern Virginia will be the largest recipient of transportation investment in the entire metro area through 2030, including $15 billion in committed multi-modal transportation investments by 2023 and an additional $14 billion planned in the remaining years to 2030. Their list of transportation additions include another entrance to the Crystal City Metro, pedestrian bridges, the express lanes sprouting up in several locations, Metro expansion on the Silver Line and improvements at Dulles Airport, so the $15 billion has a larger footprint than just Crystal City, which also has a new name, “National Landing.”

Project Journey is about half way done, and this includes a new terminal on the north end of the airport, as well as relocated security checkpoints to open National Hall, and provide access to all the restaurants and shops. The current construction impacts the roadways that go by terminals A and C to some extent. The total price for Project Journey is $1 billion.

“Metro riders can see the frames of new buildings taking shape next to Terminal B/C, but their trip to the airport is not affected by the construction,” said project spokesperson Rob Yingling. “Roadway access to Reagan National will remain available from the GW Parkway and Route 1, but we encourage all travelers to take Metro to avoid airport roadway congestion,” he added.

According to Arlington County, 77 percent of Amazon employees are projected to use public transit, walk, or bike to work in Arlington. The Crystal City Sector Plan aims to “create vibrant, pedestrian oriented streets through the better use of sidewalks, streetscapes, and open space areas to improve space for pedestrians, bicyclists, parking, and transit,” the fact sheet stated.

Much of this expansion will flow into Arlington and Alexandria, according to predictions by the Arlington Community Coalition. In Alexandria, the Potomac Yard Metro Station is being enhanced to cater to the Amazon buildings going in nearby, and there are modifications planned at East Glebe Road. In Arlington, there is a new bike trail crossing planned at Four Mile Run, platform expansion at the Crystal City Virginia Railway Express station, improvements on transit stations on Columbia Pike, and a new pedestrian bridge from Crystal City to the airport.

Since 2010, the Crystal City Metro stations have suffered, with a 29 percent drop in metro ridership, mostly due to the Base Realignment and Closure (BRAC) and budget sequestration. The transportation systems serving National Landing currently have substantial unused capacity to accommodate additional travelers, according to Arlington Economic Development information.