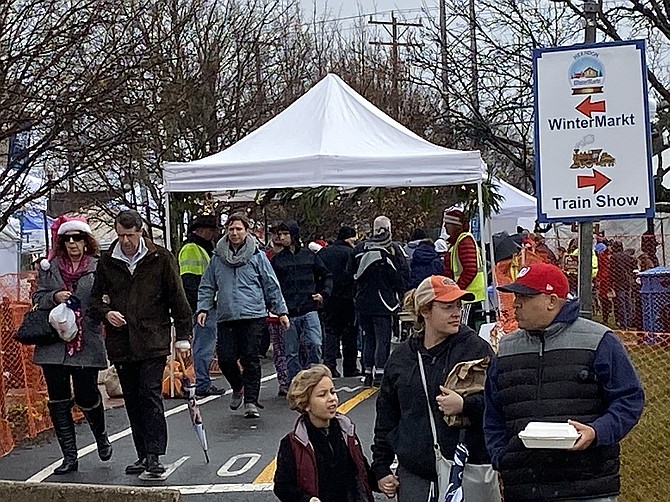 A reported 7,400 merrymakers attended the inaugural Herndon WinterMarkt on Sat., Dec. 14, held in conjunction with the annual Train Show. Photo by Mercia Hobson. 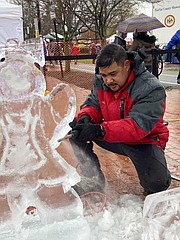 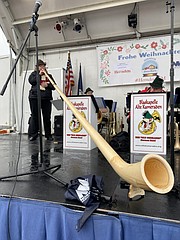 The German band unit of the City of Fairfax Band, Blaskapelle Alte Kameraden, introduces the Herndon WinterMarkt audience to spirited festmusik and the alpenhorn.

The Inaugural Herndon WinterMarkt, a free, one-day outdoor event, kicked off in grand-planned albeit wet style on Herndon's Old Town Hall Green by the Depot Saturday morning, Dec. 14. The early morning cold rain did not deter patrons, who visited the Ice Sculpting Pre-show and enjoyed the oompah-pah rhythmic sound made by the George Mason University Tuba and Euphonium Ensemble.

"This inaugural event reinforces our theme of supporting communities," said Boylan. "This will be the start of a new Herndon tradition. It wouldn't have been possible without Melissa Highley Tilton and her Executive Committee, Cindy Roeder and the Town of Herndon, our title sponsor Northwest Federal Credit Union, and our great volunteers. Thank you all," said Boylan.

"I'd like to thank the Chamber, the Town staff, and the volunteers who will ensure we are safe and sound. It's a great chance to celebrate German culture with beer, wine, and crafts," said Mayor Merkel.

FOR GERMAN DIPLOMAT Niels von Redecker, missing his native country’s Christkindlesmarkt, the place to sample specialties such as lebkuchen, a very rich honey spiced cookie, little finger-length bratwurst, stollen cake, and Gluhwein – the mulled warm wine drink – was difficult. "It's hard to be away from Germany for the holidays, but Herndon WinterMarkt will bring that feeling to the United States," said von Redecker. The band then surprised Niels' son, Caspar, by singing Happy Birthday to him. Caspar turned 12 that day. Next, Mayor Merkel and Niels signed a WinterMarkt ornament and all walked over to the town Christmas tree on the Green, where Caspar hung it on the tree while the band played Christmas songs.

As the sun came out, attendance soared – lines formed for choice of culinary delicacies such as hot nuts, gourmet chocolates, pastries, and beverages. Patrons gathered at the market booths searching through a broad range of mostly handcrafted items by local merchants, many made of natural materials such as wood and wax. However, the scheduled line-up of 14 entertainments capped the event.

The German band unit of the City of Fairfax Band, Blaskapelle Alte Kameraden, introduced the Herndon WinterMarkt audience to spirited festmusik and the alpenhorn. It was a long wooden, natural horn of conical bore with a wooden cup-shaped mouthpiece used initially to call cows from the alpine pastures. Its distinctive sound combined the richness of a brass wind instrument with the softness of a woodwind instrument.

"How fantastic... There would not have been a WinterMarkt without them (bands and vendors)...It was wonderful to see just how many wanted to be involved and were committed to making it a success – rain, snow, or shine," said Tilton.

Artisan Andy Black showed his wood-carved works to Deb Grupenhoff of Herndon. "I'd heard the market was coming, and I had to check it out. I frequent any festival in the Town of Herndon," she said.

For ice sculptor Eric Baisas of Woodridge, the joy of sawing and etching the ice showed in his face and words. "This was a hobby, but now it's my source of income," he said.

THE BIG ATTRACTION, though, remained the atmosphere created by welcoming volunteers and thousands of people who came from the town and surrounding communities to enjoy the open-air ambiance of a European-style winter market recreated in the Town of Herndon with twinkling lit stalls, perfect for the holidays.

"It takes a village. We had an amazing committee and cadre of volunteers, plus the support of the Chamber, the town, Northwest Federal Credit Union and our other sponsors. We literally could not have done it without them. The final (attendance) count was more than 7,400 merrymakers. We were thrilled to see so many people from the community come together to celebrate and welcome visitors from near and far. They all brought holiday spirit with them, and that's what made WinterMarkt truly special," said Melissa Tilton.