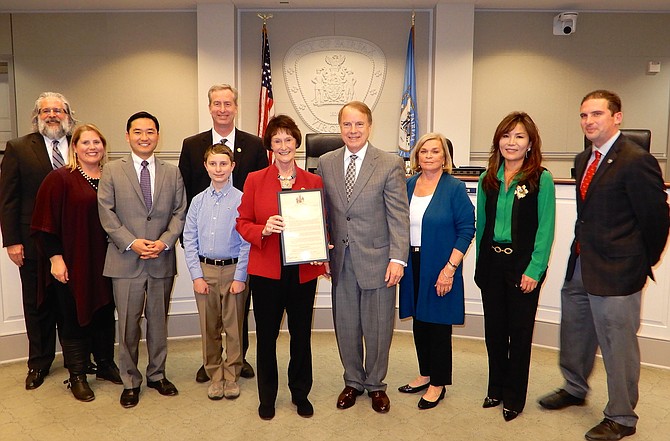 After three decades of service on the Fairfax County Board of Supervisors, Chairman Sharon Bulova will retire at the end of the year. Meanwhile, she’s receiving many well-deserved honors and accolades from various entities. And at the start of its Dec. 10 meeting, the Fairfax City Council feted her, too.

Presenting Bulova with a special proclamation from the City, Mayor David Meyer said, “Tonight, we’re giving you another piece of civic swag.” He then told those attending, “I’ve personally enjoyed working with her for many years. She’s established an openness and a willingness to listen to people, and they all appreciate it.”

The document detailed Bulova’s accomplishments, including “providing a model of collaboration and cooperation among local governments and a voice of reason. She’s been a steadfast supporter and a loyal friend of the City of Fairfax, [with an] unwavering commitment to fairness and equity. Her life’s work is a legacy to the best in public service, and we express our heartfelt gratitude to her.”

“This is quite an honor,” said Bulova, accepting the proclamation. “It has been an honor and a privilege to serve the people of this county. In local government, there’s always something going on, and you’re closest to the people you’re representing.

“You can’t go into a grocery store without coming out with a list of constituent issues to follow up on – and you’ve got to love it,” she continued. “It means a lot to receive this from the Fairfax City Council. It’s been a great partner to the county.”