Big or small, crowds love them all. 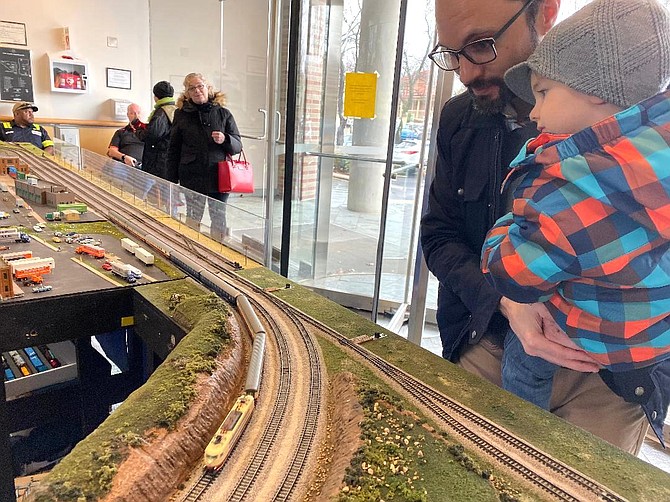 Luca Corso, 3, learns all about trains from his dad Phil, who likes the smaller N scale models. Photo by Mercia Hobson. 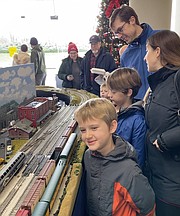 The Herndon Holiday Train Show, now in its 14th year, returned to the historic downtown district for a two-day display, Dec. 14-15. Open from 10 a.m.–4 p.m, members of the Northern Virginia N-Trak (N gauge) and the Potomac Modular Crew (HO gauge) operated their model trains in the lobby of the Herndon Municipal Center.

Luca Corso, 3, learned all about trains from his dad, Phil, who liked the smaller N scale. Charlie Schumann, 7, and his brother Cooper, 9, of Herndon, preferred watching the more massive HO scale model trains. The boys stood nose to rails, transfixed waiting for their favorite train to round the bend again. "I like that they have a Mini Cooper," said Charlie.

The town's real red caboose that sits between the Herndon Municipal Center and the W&OD trail was open as part of the show. According to author Carol Bruce, it is a symbol of the railroad that for so many years was the heart of the town. Also open was the Herndon Depot Museum. It housed railroad memorabilia, information on Commander William Lewis Herndon for whom the town was named, and artifacts from the U.S.S. Herndon (DD-638), the second ship of the United States Navy named for Commander William Lewis Herndon. The U.S.S. Herndon participated in the World War II Normandy Invasion.