“The financial statements were given an ‘unmodified’ opinion, which is the highest level of assurance that we are able to give,” said auditor Aires Coleman. Auditors can’t assure “everything was good” with the schools’ overall financial situation, only that they found “nothing wrong” with reviewed accounting statements and protocols. The opinion includes the auditor's’ judgment of the “reasonableness” of assumptions used to determine pension and other future liabilities, she said.

The report includes various metrics describing the school system’s broader fiscal health, some of which are described in the accompanying charts.

According to Superintendent Dr. Gregory Hutching’s introductory letter in the report: “The school division will face funding shortfalls that range from approximately $17 million for FY 2020 to over $54 million by FY 2023. Under the Code of Virginia, School Boards are required to adopt a balanced budget, which means the projected revenues plus beginning fund balance must fully cover the total estimated expenditures. As a result, the School Board and division leadership are analyzing various strategies to increase revenue and reduce costs, while maximizing overall efficiency to ensure structural deficits do not continue.”

Asked to expound, the schools administration said in a statement: “One of our key strategies is to work with city staff to maintain or grow the city appropriation funding. We are continually looking for grant programs (government and private) and community partners to support our activities. We are working with benefits consultants to review our employee benefits programs to reduce costs and ensure we are competitive with surrounding jurisdictions.” 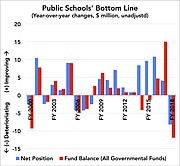 The school division’s net position and fund balance, measures of fiscal health, have improved over the long term, notwithstanding periodic changes in calculation methods that can complicate historical comparison. “Increases or decreases in net position over time may serve as a useful indicator of whether the financial position of the school division is improving or deteriorating,” according to the schools’ FY 2018 Comprehensive Annual Financial Report. The division’s net position is its bottom line. Specifically, it’s “the difference between assets and deferred outflows, on the one hand, and liabilities and deferred inflows, on the other,” according to the Governmental Accounting Standards Board, a standards-setting organization. It includes non-monetary capital assets (land, buildings, etc.) and long-term pension liabilities. Fund balance is similar, though narrower and shorter-term in scope, indicating only the net of financial assets and liabilities of specific funds, such as the General Fund. Fund balance could impact the schools’ ability to address future budget deficits and emergencies. Regarding the dip in FY 2018, the administration said in a statement: “Our fund balances have remained relatively stable or increased slightly since FY 2015, except the Capital Projects Fund. … The Capital Projects fund balance increased significantly in FY 2017 … due to funding from bonds proceeds received in advance of planned capital projects spending. Spending for capital projects (Ferdinand T. Day Elementary School, Early Childcare Center, etc.) occurred in FY 2018 causing decrease of fund balance ….” 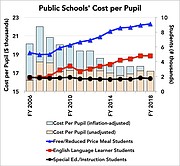 The school division reports generally declining per-pupil expenditures, despite generally increasing enrollment of higher-cost students. The trend indicates the division increasing efficiency of its use of resources, but also revenues not keeping pace with growing enrollment, said the division’s acting CFO Dominic Turner. Alexandria spends more per student than seven of 10 regional jurisdictions, but less than Arlington and Falls Church, according to the FY 2019 Washington Area Boards of Education Guide, an annual publication. Though it serves a disproportionate share of English learners and students eligible for federally subsidized meals, who require additional services and supports, and therefore costs. Alexandria’s student body consists of a higher proportion of both subgroups than seven jurisdictions — only barely behind Manassas City and Manassas Park City’s in the first case, and Manassas Park City and Prince George’s in the second. Alexandria’s proportion of special education enrollment is about even with six jurisdictions, and a few percentage points lower than Arlington, Fairfax and Falls Church. 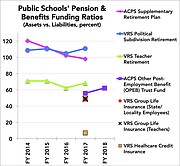 The school division’s latest reported data indicates varying levels of health for employees’ pension and other benefits trust funds. The ideal funding ratio is 100 percent, said Michael Covington, the schools’ accounting director. Hitting that target involves juggling numerous factors. The value of assets constantly adjusts, as employee and employer plan-replenishing contributions may change, and as the market oscillates. At the same time, statisticians forecast pensioners’ future healthcare needs, deaths, etc., aiming that a fund is always sufficiently stocked to pay out what it’s supposed to. The division only locally controls the plans represented by the pink and purple lines. The division and its employees pay into the state-controlled Virginia Retirement System (VRS), represented by all the other colors. The schools’ supplementary plan (pink) is currently funded at an ideal level. The schools’ OPEB funding level isn’t yet sufficient, but will continue to climb, said Covington. Other state-controlled plans are also insufficiently funded, perhaps heralding contribution rate hikes in the future, said the division’s acting CFO Dominic Turner. The division would have to satisfy increased contribution requirements in future budgets. (Note: Most trends terminate in FY 2017 because reporting for most plans lags by one year. Some plans have shorter data histories because accounting standards didn’t always require their reporting.)