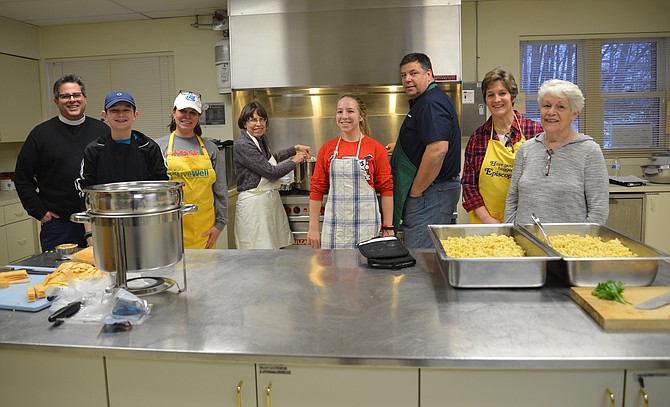 “I talk with a lot of our visitors who have full-time jobs, but circumstances and the lack of affordable housing in our area have brought them to this place.” —Christina Manning, Volunteer

The polar vortex swept down upon the region all last week, with near-record cold temperatures and accumulations of snow and ice to make life less-than-pleasant.

For most, the effects of that artic blast were at worst uncomfortable and annoying, causing chaotic schedule changes with school closures and hazardous road conditions, but at least most were able to turn up the thermostats in their homes, huddle around fireplaces, or turn on the electric blankets and space heaters to keep themselves cozy despite the elements at play outside.

For some of area neighbors, however — like the homeless and the more vulnerable — the effects of winter weather are more dire, even life-threatening.

Even before the worst of the weather hit the region, Fairfax County Police were investigating three apparent weather-related deaths. An 86-year-old resident of a Reston senior living facility was found outside the housing center by local police officers, called in to assist in a search when the elderly woman was determined to be missing.

A 47-year-old man, with no fixed address, was found asleep in the laundry room of an apartment complex. He was pronounced dead by Fairfax County Fire and Rescue when they arrived on the scene.

On Jan. 14, officers arrived at the assisted living center in Great Falls, responding to a CPR call for an 88-year-old resident who was found outside the facility and succumbed to the effects of the cold.

“It doesn’t take long for a person to become endangered by exposure to cold weather,” said Brenda Dushko.

Dushko is the director of development for FACETS, a nonprofit that has been serving our neighbors in need since 2003 and a founding and active partner in the Fairfax-Falls Church Community Partnership to Prevent and End Homelessness.

FACETS works year-round to help break the cycle of poverty and homelessness, but a major portion of their mission is dedicated to running the Hypothermia Prevention and Response Program for the county’s Human Services Region 4 - Western County/Fairfax and Centreville areas.

HYPOTHERMIA is a life-threatening condition, brought on when the body temperature drops below 95 degrees – not far below the average normal temperature. With a warm coat, gloves and a hat, a warm car to travel in and a warm home to avoid prolonged exposure to the cold, hypothermia doesn’t present a problem for most.

“But if you spend much of your time outdoors, looking for a warm place to stay, that’s another story,” said Dushko. “Now imagine being outside for hours overnight and you can quickly see why our homeless are in extreme danger, even more than usual, during these winter months.”

Dushko spoke on Friday, Feb. 1, during a tour of the temporary hypothermia shelter at St. Christopher’s Episcopal Church on Hanover Lane in Springfield.

“The good people of St. Christopher’s have been running their week-long shelter as part of the program for 15 years, right from the very beginning,” she said.

From November through March each year, between 30-45 faith communities gather a small army of volunteer congregants and open their doors for a seven-day stretch to offer hot meals, a warm place to sleep, other items of need, and companionship.

Christina Manning is one of the St. Christopher volunteers and she has been giving her time to this cause for all 15 years that the church has been involved.

“It’s really just helping out a friend,” she said in between stirring a steaming pot on the church’s kitchen stove, unwrapping other food items, and mixing up some macaroni and cheese. “So many of us are just one step away from being in the same situation. I talk with a lot of our visitors who have full-time jobs, but circumstances and the lack of affordable housing in our area have brought them to this place.”

Volunteering runs in the family, as Manning was joined in her kitchen duties by her 15-year-old son, Zach. “He’s been coming here since before he was actually born,” laughed Manning, “then he came in his stroller, and eventually he became a full-blown helper.”

On this night at St. Christopher’s, Zach wasn’t the only young person doing their part to help others: 16-year-old Sarah Wilsey was also doing food preparation at the steel kitchen work table, while her father, David Wilsey, worked the roux on the stove.

“The people who come here, they are just like us, just in a bad situation,” said Sarah. Dad David has been volunteering at the St. Christopher’s shelter event for the last 10 years. “This is something I can do to give back, to help others – and I can cook.”

Katy Dunlap, who organizes St. Christopher’s turn as a shelter, says it takes about 15 people per day to keep things running. In addition to those who cook, serve and clean, there are people who help with intake, the overnight volunteers who stay with the guests, and those “who just come for a while to talk to our visitors.

NOT EVERYONE wants to talk, but some do and seem to just be happy to have a conversation, to be seen and listened to.”

“J” – a young woman who is hampered by a brain injury that affects her memory and other cognitive abilities – was shyly willing to talk a bit about herself. “J” who was once employed as a teacher and also worked in retail, has been moving from shelter to shelter since the cold weather descended.

“I am really trying to make it, to find a stable living situation and get back to work,” she said. She is being aided in her endeavours by a FACETS caseworker, but the fact that she was turned down initially for any disability assistance is making her transition to “normal life” (as she puts it) difficult to say the least. “But I won’t give up. And I really appreciate all these people who care and help.”

“A” was also employed before, working for a grocery store. “It was pretty good. I liked it.” He even had housing accommodation, but was suddenly left homeless again when a change at the place where he lived left no room for him. Now on dialysis, “A” is back on the streets, but working with a case manager and hopeful that his situation will improve. He, too, says he is grateful for the people who open their doors to help.

“It gets lonely sometimes, people don’t want to see you. Some are afraid of you, so it’s nice to be here, have a good meal and people to talk with.”

The lay volunteers at the participating churches are supported by trained FACETS staff and volunteers, also on sight overnight and offering guidance and resources to the clients. During the season, Dushko noted that some 3,800 volunteers donate more than 33,000 hours to running the shelters, providing transportation and other services to their neighbors in need.

The extreme cold has seen the numbers of clients at all of the county’s shelters, both the permanent and the temporary, rise sharply, Dushko reported. Last year, the county assisted almost 1,100 people in need of shelter during the winter months.

“We had about 40 people here last night,” said St. Christopher’s pastor, Peter Ackerman, and a line had already formed outside the doors by 4:30, although the official opening hours don’t begin until 5 p.m.

Where To Find Help

Several other partners join FACETS in the mission to prevent and end homeless and to keep the homeless from being another Fairfax County Police Department statistic during the cold.

In Human Services Region 1– the South County – New Hope Housing operates the Eleanor U. Kennedy Shelter in Ft. Belvoir as well as managing the temporary shelters in the area. Call 703-799-0200 or visit the website www.newhopehousing.org/programs/shelter for more information on Region 1 assistance.

Human Services Region 3– North County/Reston and Herndon is served by Cornerstones operating the Hypothermia Program and the year-round Embry Rucker Community Shelter. See the website at www.cornerstonesva.org or call 703-437-1975.

The City of Falls Church is also under the assistance umbrella of New Hope Housing with contact available through the website or by calling 703-799-0200.

Visiting the Fairfax County website for the Office to Prevent and End Homelessness will also also yield related information and resources.

Citizens are urged to check on vulnerable relatives and neighbors. When seeing someone who is unsheltered and may been in distress, call the non-emergency police phone number at 703-691-2131 (TTY 711) and a police officer will respond and do a wellness check on the individual in question, transporting them for medical assistance or to shelter as required.