From Awkward to Artistry in Motion in Reston
Votes

From Awkward to Artistry in Motion in Reston

Fun on the Ice at the Reston Town Center Pavilion 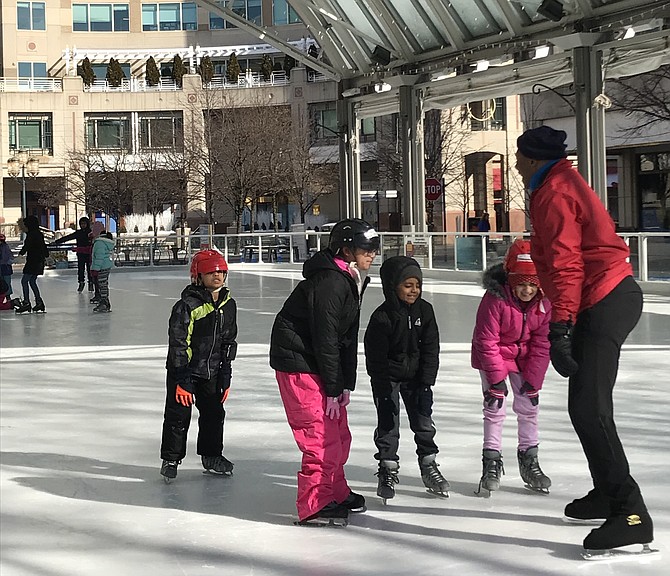 During one of the Learn to Skate Beginner Lessons held Saturday morning, Feb. 2 at the Reston Town Center Ice Skating Pavilion, students practice bending their knees a bit and placing their hands on them while keeping heads up and eyes forward to maintain their center of gravity, gaining control and balance. Photo by Mercia Hobson. 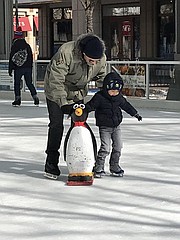 At the Reston Town Center Ice Skating Pavilion, it's a learning process for Logan Binnix, 3½, formerly of Herndon, as he steps out on the ice for the first time. With dad Bryant and the sliding penguin giving him confidence and balance, young Binnix slides, falls, works his courage back up and takes his first glide across the ice.

Whether for exercise, leisure or the challenge of mastering something at first awkward, to doable, to filled with grace and artistry in motion, the Reston Town Center open-air Ice Skating Pavilion is the place to lace up those skates. Centrally located in the heart of the town center, the open-air Pavilion is transformed into a shimmering ice-skating rink through March 10 and offers a menagerie of skating opportunities.

On Saturdays, there is the Cartoon Skate at the Rink where Scooby-Doo and Cat in the Hat share the ice with public skaters. On Thursdays is College Night at the Rink during which skaters with valid college IDs receive $2 off admission and on Fridays is Rock the Rink with a DJ, music, games and prizes. Skating continues until 11 p.m. that evening.

Early Saturday morning, Feb. 2, students in two of the Learn to Skate Lessons took to the ice under the watchful eyes of their instructors, building confidence while learning the basics skills of skating. Children wearing protective helmets began to master the fundamentals, how to stand, fall, get up, stop, march then glide.

"Bend your knees, put your hands on them, look forward," called the instructor to his class of four children. Out on the ice, young skaters like Arjuri Pandit, 6, heeded the directions, regained balance and slowly glided over the ice. From the sidelines, Ruchi Pandit watched her son. "It's a great opportunity here. Arjuri's been going out on the rink on his own," said Pandit.

Sliding over the ice takes confidence and balance. During the public session, Bryant Binnix, former Herndon resident took his three and half-year-old son, Logan on the ice but not without the sliding penguin stand helper. Not only did the penguin assist Logan and allow him to feel safe learning to skate, but dad Bryant did not have to hold up his son and possibly strain his back.

Angie Binnix, Logan’s mom, watched from the rail. "This is Logan's first time on the ice. He's not afraid, though at first, he was a little nervous. Now he wants to go on his own."