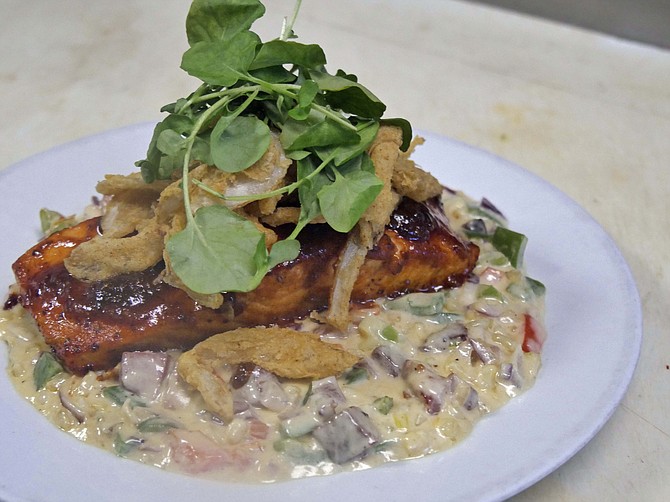 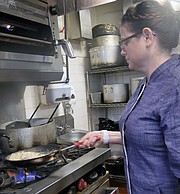 Teresa Keefer, executive chef at Southside 815 on S. Washington Street, says for her it's the sounds of the kitchen — from the early morning quiet giving way to the gradual clang of pots and pans, morphing into the rowdy conversation of the servers followed by the yelling frenetic activity at rush hour.

Keefer heats two medium side-by-side skillets for the Mustard BBQ Salmon. "We did it as a special for years, but it was in high demand so we put it on the menu."

Keefer squirts Arrezzio (vegetable and olive oil) in a skillet and turns the burner on high. She adds about four ounces of cubed pork, not from the leg but from the hog shoulder in traditional Southern Louisiana fashion, along with Cajun spices. "We use a lot of Cajun spices." In about a minute she adds about 4 ounces of corn. "I am making a tasso maque choux as the bed for the salmon. Everything is about 4 ounces."

She jiggles the pan off the burner to mix the pork and corn and then dumps in a mixture of chopped red and green peppers and purple onion which she cooks for a couple of minutes.

Keefer turns the second burner to high and spreads the bottom of the skillet with a generous portion of Boilermaker, the house-made barbecue sauce. The sauce is a little sweet, brown sugar based mixed with a little bourbon and Creole mustard. "Now I'll show you how we do the salmon."

Keefer places the seven-ounce filet of salmon on the barbecue sauce. She turns back to the tasso in the first skillet and flips the mixture into the air to combine the pork and vegetables. In goes 6 ounces of heavy cream to thicken the mixture. No stirring. Finally she throws in some grated Parmesan.

"And then this is how we fix it up. We put the tasso on a round white plate as the base." She arranges the barbecued salmon filet on the top. Onion strings have just been flash fried in one of the six deep fryers. "We use half corn flour and half regular flour and some Cajun seasoning. This is our little trick to make them golden."

"We add the onion strings to this dish to give it some texture." She tops off the salmon with a handful of crisp watercress. "See the pretty colors." She explains the great thing about this dish is that while it's not vegetarian because of the tasso ham, it can be individualized to leave out the meat."

Keefer says she always wanted to own a restaurant. "I was attracted to the hustle bustle. We work very hard." But she decided it would be beneficial to attend culinary school because it would teach her more about the business end. So she went to culinary school in Charleston, S.C. where she picked up her flair for Southern dishes.

"When I came here, there were a lot of Cajun dishes but now probably the most popular customer favorites are the Southern dishes — meatloaf with gravy, chicken fried steak, panko crusted flounder plated over shrimp pirloo” and, "We sell a ton of mac and cheese. I use five different cheeses; smoked Gouda is the secret." She says it's so hard but her own personal favorite is probably the blackened fish salad minus the cheese due to dietary issues.

Keefer has been at Southside 815 since 2002 when she started as a server. "I knew the front end of the house very well. Then John found out I could cook." Keefer says she likes to push the customers and to look at things evolving. I push duck or lamb and I'm always so nervous but they love it." She says she tried fried buffalo cauliflower recently. "I was worried about how our loyal customers who come in 5-6 times a week would like it." But they enjoyed that they were eating something different that wasn't meat, and it was healthy.

Rush hour is winding down and the noises continue. Keefer says that she doesn't yell at people, "but I'm loud. We have guests who tell me they can tell when I'm in the building."