Winning Photos on Exhibit at Walker Nature Center in Reston

Images of birdlife meant to celebrate the Centennial of the Migratory Bird Treaty Act. 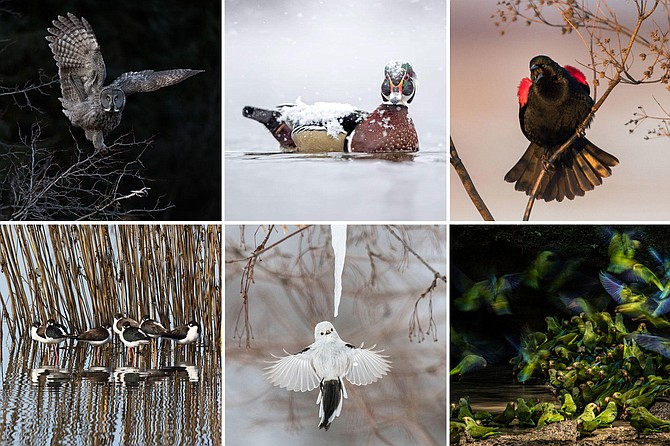 In the 2018 Audubon Photography Award Show, the Grand Prize Winner by Steve Mattheis, captures a Great Gray Owl staring directly into the camera lens as it fights for balance on a thin branch.

Steve Robinson and Cynthia O'Connell of Reston admire the large-scale photograph of a Long-tailed Tit taken at Akan-Mashu National Park, Japan by Diana Rebman/ 2018 Audubon Photography Amateur Winner. The bird nibbles on the tip of an icicle to get a drink.

Beauty, drama and the unusual behavior of birdlife are captured in the "2018 Audubon Photography Awards Show," free and open to the public Feb. 8-27 at Walker Nature Center, Reston. Reston Association and Audubon Society of Northern Virginia hold the distinct honor to co-sponsor and display the traveling show sponsored by Canon.

Called "Bringing the Joy of Birds to Us," the twelve, 30 by 40-inch photographic prints on exhibit, with copies available for purchase, are winning entries in the renowned annual bird photography contest the National Audubon Society (NAS) held in alliance with "Nature's Best Photography."

According to NAS, the 2018 photography contest was meant to celebrate the many bird species protected under the 100-year-old "Migratory Bird Treaty Act," which NAS deemed, “...the most important bird conservation law." Later that year, the act came under attack by "the current administration" and the Department of the Interior, reported NAS. The administration issued guidance in spring of 2018 that the law would not be used any longer to hold people and companies accountable for the unintentional killing of animals.

"The ‘Migratory Bird Treaty Act’ covers almost all of the birds in the photographs exhibited here," said Katie Shaw, Walker Nature Center manager on Sunday, Feb. 10 during the exhibition's Open House. “ We are thrilled we got the show for the second year," she said.

JOANNE BAUER, Secretary of the Audubon Society of Northern Virginia, introduced the guest speaker, Stephen Freligh, Co-publisher of "Nature's Best Photography.” "Steve was one of the jurors for this exhibition," said Bauer.

Freligh told the audience how the judges whittled down nearly 8,000 photos submitted to the annual photography awards contest by entrants from all 50 states, Washington D.C., 10 Canadian provinces and beyond. Freligh said about the photographers. "An amazing collection," said Freligh. 'We featured winners from across the globe, even Tokyo," he said.

In compliance with the Audubon Photography Awards Official Rules, entrants could not submit photos taken at game farms nor digitally altered beyond standard optimization. The images had to accurately reflect the subject matter as seen through the viewfinder. Judges looked for technical quality, artistic merit and originality in the entries, according to NAS.

Freligh said, "It is an exciting process (judging) and for someone who has looked at over one million images...what I found is to clearly investigate and go back to every image entered...(Also), what looks good as an iPhone shot, may not look good blown up...It's a virtual safari... a story told through the photographer's eyes and experience."

Judges awarded four prizes: a Grand Prize to the highest scoring photograph across all divisions and one prize each to the top scoring photos in the Professional, Amateur and Youth Divisions. Freligh said that because the judges' selection process was blind, it was after votes were cast did they only realize then that one photographer swept an entire division, Liron Gertsman.

"Liron Gertsman, 17 of Vancouver is a great representative of our emerging photographers, not only serving his community with his works but reaching across the globe to inspire a passion for the outdoors. He inspires youth, teens and those young at heart," exclaimed Freligh.

TWELVE PHOTOGRAPHS which received Winner, Honorable Mention and Top 100 in the categories, Professional, Amateur and Youth along with Grand Prize Winner are shown in the exhibition at Walker Nature Center. The images are featured in "Audubon" magazine, Summer 2018, "Nature's Best Photography" magazine and the "2018 Nature’s Best Photography Exhibition" at the Smithsonian National Museum of Natural History.

Shaw said that through grant funding, the Walker Nature Center recently received sturdy birding backpacks filled with gear for visitors to borrow at no charge if they wish to explore the 72 acres of woodlands surrounding Nature House for birds. For more information about events at Walker Nature Center, located at 11450 Glade Drive, Reston, call 703-476-9689.