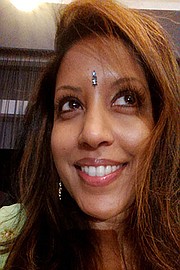 Nayna Agrawal will be studying and writing in a Hollywood TV program for one year.

Nayna Agrawal, who grew up in Vienna and now lives in Los Angeles, was selected as one of eight scribes in the Disney-ABC Television 2019 Writing Program for comedy from a pool of several thousand writers who applied.

“The program is so prestigious; it’s really regarded as the Holy Grail in Hollywood of getting your foot in the door and having your work recognized. It’s the Jackpot of building your name, your portfolio and your sense of identity as a writer in Hollywood,” she said. “When I first learned that I won the award, I was driving; I had to pull over my car and just scream for 20 seconds because it was a dream come true.”

Created in 1990 with the Writers Guild of America West, the Disney-ABC program’s goal is to help participants secure their first staffing assignments via a Disney-ABC Television series. While staff jobs are not guaranteed, program organizers say they have a nearly 100 percent hiring rate.

Nayna started the program two weeks ago and will be getting a $50,000 salary through February 2020, during which time she’ll be working on building her portfolio and network as well as honing her writing voice. Other Hollywood studios have similar writing programs, including CBS, FOX, and NBC, with the promise that participants may be a staff writer on a TV show.

PAST PROGRAM ACTIVITIES have included: workshops led by veteran TV writers, producers and program alumni; improvisational workshops; and networking mixers with executives. The program also provides engagement with executives, producers and literary representatives, designed to build relationships that can prove invaluable in developing a TV writing career. Nayna is currently waiting to see what show she’ll be writing for.

To enter, Nayna had to submit two scripts. The first was an original pilot that she created for a series called “American Pia.” She said: “It was about my time living with a xenophobic family in Santa Clarita, Calif.” She worked on it for six months and it went through about six revisions, as well as getting noticed at the New York Television Festival, which helped land her an agent, she said.

For the second part, she wrote a “spec” for a current show on the FX Network called “Better Things.” She said: “So, a spec is when you show you can mimic the voice, the structure, and the spirit of the show so that someone who is hiring the writer can say this person gets how the show works.” In addition, there were interviews; she did a pitch, she wrote a personal essay and had recommendations as well.

So, what inspires her with her writing? She said: “I would say what inspires me to write is giving agency to voices, to stories, to issues that are often overlooked. I think writing about mental health and the Asian immigrant communities is something that is very important to me,” she said. In addition, what also inspires her is her “personal identity (she’s Indian), fighting against the identities that are imposed on us by society, by our families, our culture and social standing,” she said.

NAYNA grew up in Vienna, the daughter of B.P. and Vimal Agrawal, who are Indian immigrants. She attended James Madison High School and the University of Virginia, where she studied engineering and economics. She got her Master’s degree in stage and screen writing at Northwestern University in Evanston, Ill. She moved to Los Angeles in May 2015 after having worked as an international aid director and investment analyst.

“In 2013, I decided to switch careers. It was really scary,” she said. “It was really exciting and I’m so grateful that I bet on myself. It was incredibly hard but I’m the happiest I’ve ever been professionally.”