Cut-through traffic becomes the issue for the Burke Centre attendees. 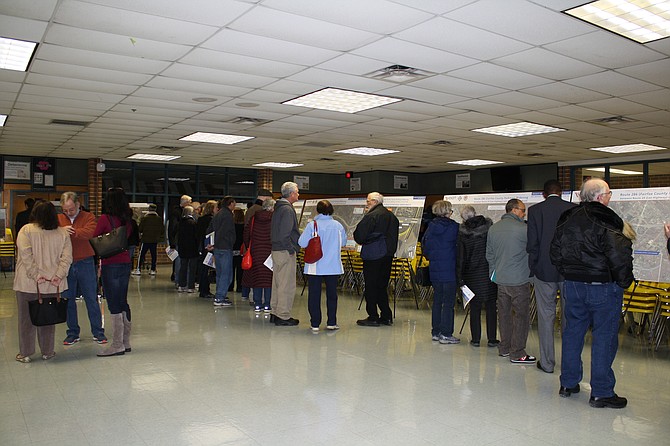 Many were interested in the parkway widening plans. Photo by Mike Salmon.

As the Virginia Department of Transportation discussed the plan for widening a five-mile section of the Fairfax County Parkway, a majority of the

At Robinson Secondary School, VDOT hosted the meeting to a packed house.

meeting attendees were concerned about the potential cut-through traffic, specifically on Roberts Road. When they alter the configuration at the Burke Centre Parkway intersection, drivers wcould adjust their route to Roberts Road, which will lead to congestion on the side streets and neighborhood roads, they said.

The Burke Centre intersection plan will cause “a horrible ripple effect,” said Nancy Morrison, a Burke Centre resident that attended an earlier community meeting at Burke Centre where this was discussed.

Jay Johnson and Renee Mumford were also at the Burke Centre meeting, which was held before Christmas. “There was such an outrage at that proposal to do away with that light,” Johnson said.

Johnson, Mumford and Morrison were among the packed house Jan. 7 at Robinson Secondary School as officials honed the plan, listening to suggestions and laying out data supporting their design. According to VDOT, the $195 million project with interchanges at the Popes Head Road intersection, the future Shirley Gate Road Extension, and other intersections along the route “aims to relieve congestion and improve safety.” 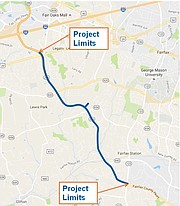 This map shows the project limits.

made since the last meeting on this project in October 2018, and some new data concerning noise, shared use paths, the overall footprint of the project, and interchanges at Shirley Gate Road, Popes Head Road and Burke Centre.

THE CROWD AT ROBINSON was larger than expected, and when they set out 220 seats, more were added as people filed in the doors.

At one point, John Maddox, a VDOT consultant, took over on the slides, starting out with the $47 million that the Popes Head Road interchange plan would entail. That number could come down depending on the ramps that would or would not be included, and there is space on the comment sheets for the attendees to add their preference. There were comments that the complicated crash data and another called it a “shell game,” as Maddox continued.

Then when he got to the Burke Centre Parkway interchange, he acknowledged the input they’ve gotten. “After the last meeting, we did hear from the Burke Centre Conservancy,” he said. A flyover would be one solution, but the cost would be $20-30 million, and “we don’t feel we could do this under the conditions we have now,” he said. He did acknowledge spot improvements along Roberts Parkway could be made with the project to handle the additional traffic, but nothing is on paper yet.

When it came time for questions, there were comments about the current state of the roads and potholes, timing the traffic signals, the merchants on Burke Centre Parkway, and one about the flyover and the crash data.

“The flyover is going to cost too much money how much is a life worth?”

One woman complained about pulling out on Route 123 now, and thought it would be worse when the parkway gets widened. “I expect to have a heart attack one day trying to get out,” she said.

Others were concerned about rumors that there will be toll lanes on the parkway. “There’s no plans on this project at this time,” said Roper. Supervisor Pat Herrity (R-Springfield) spoke up from the audience against the idea of toll lanes.

Not all were unhappy about the plans. Eric Frady and Ryan Conner live in Colchester Meadows, close to the Popes Head Road interchange.

“They’re giving us our own service road,” said Frady.

“I think they’ve done a pretty good job with the circumstances,” added Connor.

THE POPES HEAD ROAD interchange is part of Phase I, and will be built first with some of the funding already in place for this part. Construction could begin as early as 2020 and could be completed in 2022. The project is being financed with federal, state and local funds, including Smart Scale and Northern Virginia Transportation Authority funding.

Comments will be accepted until Jan. 22.