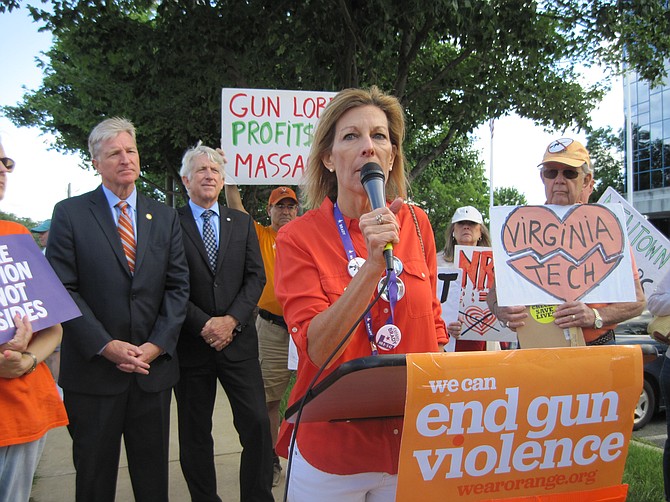 With a slogan “Let’s Turn the NRA Orange,” more than 150 gun violence prevention advocates did just that on Friday, June 14 at the National Rifle Association’s (NRA) headquarters in Fairfax, with help from Attorney General Mark Herring and Secretary of Public Safety Brian Moran. Martina Leinz of Brady United Against Gun Violence spearheaded the event lamenting the Virginia Beach massacre and that “thoughts and prayers” are not enough and that we need new laws and action. She was followed by Secretary of Public Safety Brian Moran and Attorney General Mark Herring. Secretary Moran said it was “past time to take action.” They reflected on Gov. Ralph Northam's call for a special legislative session on gun control for July 9 due to the latest shooting. This event was also sponsored by the Coalition to Stop Gun Violence and Concerned Citizens Against Gun Violence (CCAGV). These monthly vigils are held every 14th of the month at 10 a.m. (2 p.m. if it falls on a Sunday) at 11250 Waples Mill Road in Fairfax.