A Home of Their Own – Part 2: Workforce Housing in the Town of Herndon?
Votes

A Home of Their Own – Part 2: Workforce Housing in the Town of Herndon? 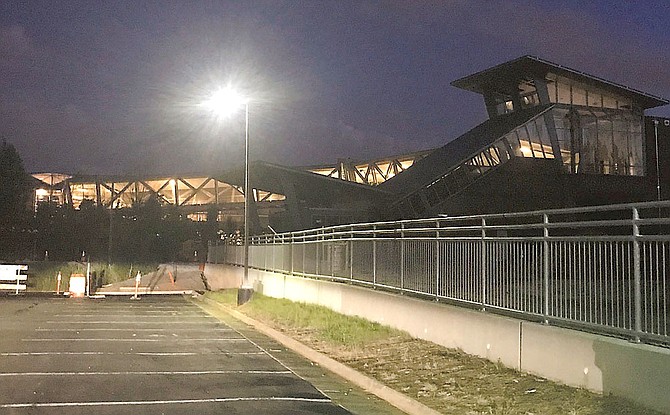 The Herndon Station on the Metro Silver Line offers opportunities, which could lead to workforce housing options at the higher density Herndon Station and Innovation Station. Photo by Mercia Hobson.

The Town of Herndon is about to ride the rails of the Silver Line expansion.

Not only are there no designated workforce housing units currently in the Town of Herndon, but also none are in the pipeline, and the town's population is about to explode.

CORNERSTONES is a nonprofit organization that serves neighbors in need in northwestern Fairfax County, "an already high cost-of-living region" which includes the Town of Herndon.

"The Town of Herndon has a fair share of market-affordable housing – that is housing that is market-priced but meets the definition of housing that would be affordable based on household income,” said Kerrie Wilson, CEO of Cornerstones. “In addition, there are private landlords who accept housing choice vouchers or developers like Cornerstones who have preserved and rent permanently affordable units in neighborhoods in Herndon, Reston and the Dulles corridor."

"With nearly 70 percent of Herndon's housing built before 1980 and the arrival of the two Silver Line stations, this is a critical time for the Town and Fairfax County to solicit creative options to preserve and develop new affordable homes in this area,” Wilson said. “Given the anticipated growth in the workforce in the Herndon area, Herndon, and the Dranesville district of Fairfax County will need to look for opportunities to maintain the diversity of housing options, including homes that are affordable for households at lower income levels," she said.

In the Town of Herndon, there could be a mismatch between where workforce jobs are located and where affordable homes are located if consideration, education, and action are not taken by the Town in the immediate future.

Many workforce individuals must choose between lengthy commutes to where there is more affordable housing or pay higher costs to live where they work.

"The blueprint for transit-oriented developments near the Herndon and Innovation Station Metro stops offer the opportunity – and increased density – that can accommodate housing that is affordable for the workforce, including people working in jobs that don't pay high wages but are critical to our economy," Wilson said.

The Town of Herndon's website shows three current residential or mixed-use development projects. They are Stanley Martin's Metro Square under construction and steps from the Herndon Metro Station; Comstock's Downtown Herndon Redevelopment project anticipated by the Town to break ground in late 2019 after land sale and "further agreements;” Penzance’s 555 Herndon Parkway directly at the new Herndon Metro Station in the conceptual design stage and the South Elden Street Area Plan in the early planning stages.

Asked if there were any means to add such housing, after the fact, meaning during the project or after the project, the Town of Herndon spokesperson replied, "No."

Why did the Town, boards and staff not request or require partnering with Fairfax County for such housing units to be included? Herndon Harbor II, constructed in 2001 within the Town limits, received funding in part through the Low Income Housing Tax Credit (LIHTC) program. Thus a certain number of units were and are set aside for lower-income households.

"There is no such requirement in the town's Zoning Ordinance, nor does the town have the resources to administer and track the on-going operations associated with designated affordable and workforce housing units," replied the Town of Herndon.

Town is "looking into necessary local and Virginia State Code amendments that would allow the town and Fairfax County to have a cooperation agreement regarding affordable and workforce housing."

Fairfax County reportedly was at the forefront in pursuing inclusionary zoning options over 25 years ago to guide the production of affordable housing according to Cornerstones.

"While towns and cities follow different standards, the Town of Herndon can still encourage and solicit proposals that prioritize affordable housing," stated Cornerstones.

"Given the need to sustain housing as our population grows, Cornerstones will be watching the development around the Herndon and Innovation station Metro stops as well as opportunities such as the redevelopment of the South Elden Street corridor," stated Cornerstones.

OVER THE LAST FEW WEEKS, two Herndon Town Council members said they are willing to champion the workforce affordable housing issue in the Town. They are Councilmembers Cesar del Aguila and Pradip Dhakal. Coincidentally, Dhakal recently inquired about the county "Penny Fund." Town of Herndon residents pay both county and town taxes yet do not seem to receive any benefit from the Penny Fund for housing.

"In 2006, Fairfax County established the ‘Penny Fund’ that has helped preserve over 3,100 units of affordable housing and provides a sustainable funding source which can be reinvested in other affordable rental programs. Developers seeking to build or preserve housing within the Town of Herndon can tap the Penny Fund or the County’s Housing Blueprint development funds and project-based vouchers, as well as other federal, state and local funds or tax credits that can be used to make homes affordable,” said Cornerstones.