Man “hopelessly stuck in the mud” on Monday was rescued due to the diligent work of his two dogs and an alert cyclist. 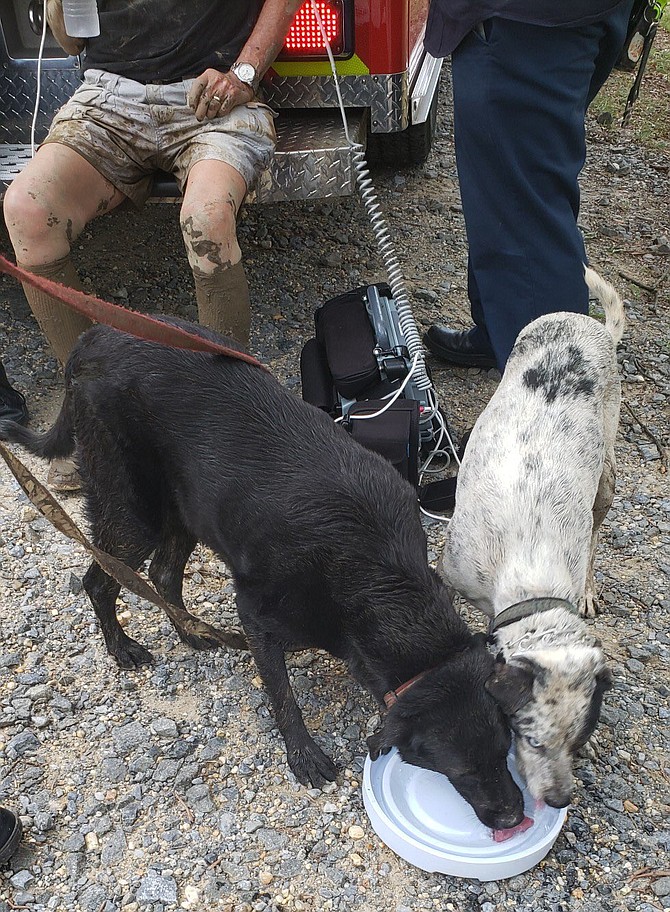 Two dogs barking got the attention of a passing bicyclist and persisted until the bicyclist found their owner, 87, who was so stuck in the mud it required rescue workers and special tools to get him free. Here the dogs enjoy a well-deserved drink, with their owner’s mud-covered legs visible behind them. Photo from Pete Piringer, @mcfrsPIO via Twitter

Two dogs barking along the the C&O Canal Towpath near Little Falls dam caught the attention of a bicyclist.

After a man got stuck in mud near the Potomac River, his two dogs, leashes still attached, got the attention of a cyclist on the C&O Canal Towpath near Little Falls dam. The dogs’ owner was out of sight 50 yards away but the dogs barked incessantly until the cyclist found the man and alerted Montgomery County Fire and Rescue.

Around 2:30 p.m., Monday, fire and rescue received the 911 call for a technical rescue of a man stuck in the mud between Lock 6 and Lock 10. Fire and Rescue and the swift water rescue headed out on ATVs and boats, and after some time looking were able to find the man, still accompanied by the cyclist, about 50 yards from the towpath.

“This is a real cat’s meow & dog gone good stuff. …Who let the Dogs Out,” PIO Piringer tweeted. “The dogs saved the day.”

The man was playing fetch with his two dogs, throwing a stick into the river. He apparently ventured onto the mud to retrieve a stick and then sank and got stuck.

The dogs stayed in his general area, but went up near the towpath, barking continuously. The cyclist noticed the dogs still with their leashes on and stopped to see what was going on. It was then that he heard the man calling for help in the distance. Because it was a wooded area, the man was not immediately visible, and without the dogs good work, he might have been stuck for far longer.

The man, 87 according to reports, suffered no injuries and did not need to be transported to the hospital.

Monday’s heat index rose above 110 degrees for the third day in a row, and Montgomery County Fire and Rescue crews were called out on numerous incidents and accidents.