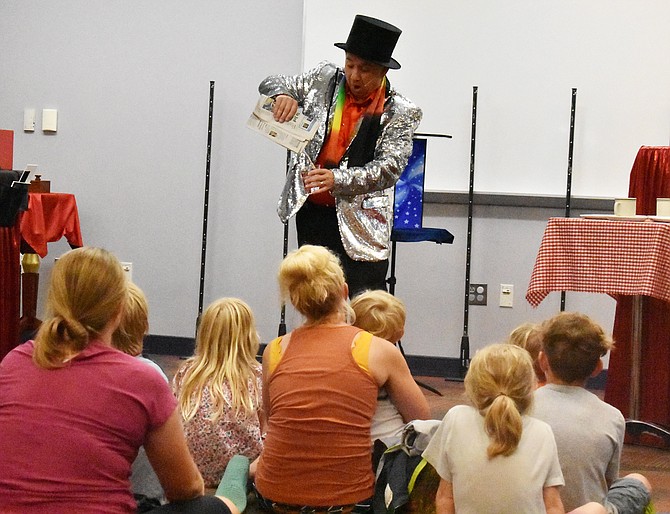 The Richard Byrd library hosted a music and magic show titled “Showtime at Your Library” on July 11 as part of the Fairfax County Public Library free summer events and reading program.

“Showtime at Your Library” was designed for children ages 6 to 12 and featured magician Steve Somers performing magic tricks and incorporating books into his act to showcase the magic of reading. When he made a rabbit appear in a wooden box, Somers spoke about “The Tortoise and the Hare,” and when he recounted his experience learning magic he compared himself to “The Little Engine That Could,” trying and trying until he had mastered tricks.

The importance of books and reading was an integral part of the show. Though magicians never share their secrets, Somers told the kids in the audience that they could learn how to do all of the stunts from his show by reading about them. “How do you do these tricks?” he asked them. “It’s in the library. You can read how to do these tricks.”

Somers also traded the classic magic word “abracadabra” with the more venue-appropriate slogan of “read to succeed.” To finish a trick, the magician would have the audience recite his magic words before the flick of his magic wand.

He closed his program with a positive message of maintaining good character to achieve your goals. “If you want to be a star, it starts with what’s on the inside,” he said. “When you’re kind… When you read to succeed. When you listen to your teachers. You can do anything when you’re a star.”

Praveen Kurup attended the show with his wife and school-aged son. This was his family’s first time at a library event. He chose to go because his son likes magic and thought this would be enjoyable for him. But he found himself and his wife having fun as well. He called the experience “funny for the adults” and “good for the kids.” After enjoying “Showtime at Your Library” so much, Kurup said he would be interested in going to another library event soon.

Summer events at libraries for elementary-aged kids include performances with music, magic, animals, and more. Each Fairfax County branch has different offerings, which can be found on their websites. According to Delia Ullberg, the Youth Services Manager of the Richard Byrd library, “family programs and storytimes are popular” and “younger kids tend to be more interested” in library events. Despite this, libraries do offer workshops and programs for teens and young adults as well.

In addition to events, the libraries also have an ongoing reading challenge called the “2019 Summer Reading Adventure.” Kids from birth to high school can participate by reading a certain amount of books and logging them online or on paper by Aug. 31. People who have read enough win a coupon book with vouchers for fun things to do locally, including mini golf and ice cream. So far this summer, Ullberg said 288 kids have completed the adventure.

Summer library events continue through the end of August at all Fairfax County branches.