In the Kitchen: Meet Chef Ivan Svalina of Old House Cosmopolitan in Alexandria 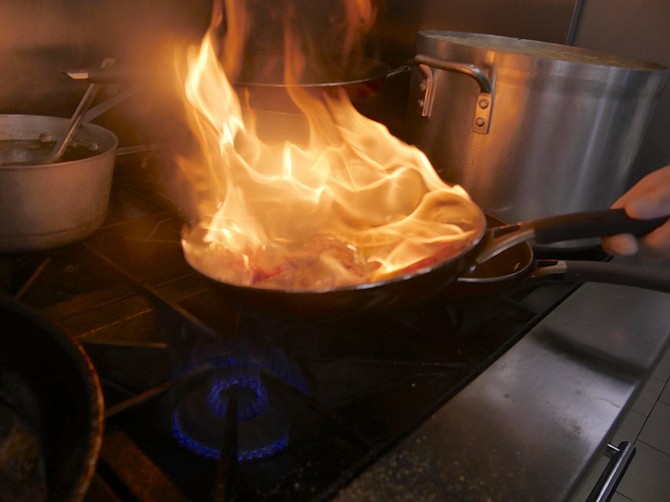 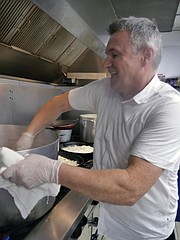 Chef Ivan Svalina is stirring the chopped red peppers and onions in the canola oil. He uses a 120-quart pot to make Hungarian Goulash. He adds beef cubes "fresh cut" and stirs it again. Svalina will caramelize the onions with a little salt and put in another layer of red peppers and onions and keep stirring with another layer of meat. "I tell the customers when they ask how long until it is good that 'when you finish your bottle of wine, it's ready.’”

Svalina says, "This pot is gonna be good for customers two days for sure. The next day goulash is much better. You chill to pull all of the ingredients together."

Svalina turns to the salad that goes with the Wiener Schnitzel. He layers a handful of chopped romaine lettuce with a handful of chopped tomatoes, red and green peppers, purple and white onions. "I add a little bit of salt, olive oil." He pulls out a two-quart container of lemon juice and sprinkles a generous helping over the combination. A quick toss and he sets it aside.

Next to the schnitzel, Svalina pulls out a large, flattened piece of veal scaloppini. He dips the meat in flour, beaten eggs and seasoned breadcrumbs. “Some people add milk to the eggs but not me.” Svalina tests the tip of the meat in the hot oil in a skillet. "Not yet."

He turns to the onions for the Züricher Geschnetzeltes, a different veal dish that he is juggling at the same time. "See, I'll deep fry the onion that I use to top the pieces of veal." He puts a handful of onion slices in a large metal basket and lowers the onions into the hot oil to flash fry for a couple of minutes.

Back to the Hungarian Goulash that gets another swirl with the long handled aluminum spoon. He adds chopped tomatoes. "You know goulash is tomato based." It continues to simmer.

The oil is ready for the schnitzel. Svalina places the veal in the skillet. "Very fast." In about a minute he flips over the schnitzel and browns it briefly on the other side. "Out it comes with slices of lemon placed on the top."

Now he heats two small skillets. "This one I will caramelize the thin strips of veal for the Zuricher Geschnetzeltes." A large pot of fresh mushroom sauce sits on the burner beside the veal. "I made a béchamel sauce and added a variety of mushrooms like white and shitake. You always slice mushrooms." He explains he added them to the béchamel and then you end with cream or milk. "We make this fresh daily."

Svalina places the veal in a carry out container for a customer and adds two ladles of mushroom sauce. He has prepared corkscrew shaped spaetzle to accompany the veal. " Spaetzle is pieces of dough, not like gnocchi which is pasta."

Svalina opened Old House Cosmopolitan 14 months ago on Cameron Street after looking for a space in Old Town for a few years. "I couldn't wait to get into the city.” Svalina came to America in 2004 and had a restaurant by the Huntington Metro for a while. Then he moved to Route 1 but he was always looking for a better location. He recently closed his restaurant there after opening on Cameron Street. “We don’t have enough family to operate both restaurants.” He explained his wife, Amela, and his sister-in-law make the desserts including the black forest cake, orange cheesecake and their version of baklava.

Svalina explains he went to culinary school a long time ago and then worked in Italy, Croatia and Germany where he worked under one of the best known chefs. His parents wanted him to be a doctor or a dentist, "but I loved cooking, the ingredients." And it all started when he was 6-7 years old watching his grandma cooking, making her daily bread, bean soup and goulash. "This Hungarian Goulash is her recipe."

He says goulash is a customer favorite. "Americans are slowly recognizing what is real food. Everybody is surprised." But customers are all different. He says he has customers who will eat nothing but lamb chops for a year "and I pressure them to try schnitzel. Then they like it and just eat schnitzel for a year. I always tell people I will give them a little sample and if they don't like they can try something else. Then everyone is happy.”