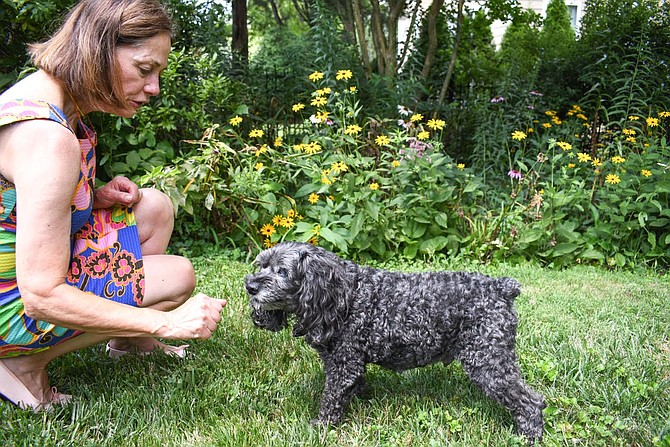 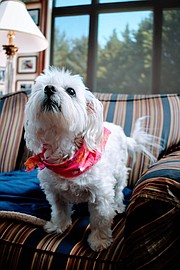 Duchess perches on the edge of the couch, most likely enjoying a Washington Nationals baseball game. 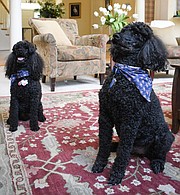 Kirby and Bentley sit in their matching bandanas. 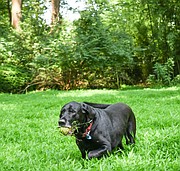 Bailey retrieves his tennis balls as well as a mouthful of grass.

Poodles and various types of crossbreeds were the name of the game for the Pet Connection issue in Vienna. Tom Davis, former Congressman, shared the story behind his 13 year old Maltese’s name, Duchess. “She is aptly named. She acts like royalty: she won’t go out in the rain, will only eat certain foods, and eschews other dogs. We have to plan our travel plans around someone being able to take care of her. One time we put her in one of those dog kennels and everyone was playing but Duchess was in the corner! She’s a loner, but she’s very sweet,” Duchess has been Davis’ loyal companion since she was a puppy and loves to go on long walks around their neighborhood. “At the end of the day she’ll just lick you,” said Davis.

Kirby, 10, Bentley, 7, come from the same bloodline. Both are black poodles that belong to the Habibi family of Vienna since they were puppies. “They have the same mom. Kirby was a litter of three boys and three girls. Bentley was from a litter of four girls and he being the only boy. So I think he took all the big boy genes and that’s how he’s bigger,” joked Elizabeth Habibi. When asked what she liked most about their furry family members she said, “Their companionship. I can have long conversations with them and they don’t talk back, unlike my kids! I can talk to them all day long,” said Habibi. “They are half-brothers. Kirby is textbook miniature poodle but Bentley is not. There is a dog size between miniature and standard called ‘moyen’ or medium and that’s what he is.” Habibi demonstrated that both of her dogs know how to sit and give her a kiss when she says “kiss,” as the dogs jump up on their legs and bop their snout on her lips.

Fourteen-year-old cockapoo Murphy belongs to Nancy and Sim Moats of Vienna. He is jokingly called “Toothless Murphy” because he is missing some front row teeth, which leads to his tongue hanging out of his mouth in a hilarious way. “One of my daughters bought a dog in college and she’d bring him here and say ‘Mom, Dad will you watch Bailey for me?’ whenever she would go off on a trip, and this happened a few times. So when my youngest daughter was a senior in high school and was about to go off to college, she said ’Mom, you should have a dog’. Well, Mom has never had a dog and Mom is not interested in dogs,” joked Nancy Moats. “So they bring this dog home after New Year’s, and he’s only a couple of months old, and he is this cute ball of fluff, but I wouldn’t even touch him for the first week. I was not raised with dogs, we were a family of six kids, we didn’t need a dog! I asked my husband, ‘Have you ever asked me in however many years of marriage for a dog?’ He responded with a resounding, ‘No, but the kids decided you should have one’,” said Moats. Like any other older dog, Murphy has had some health issues and has begun to slow down, but he still loves bounding around in the various plants and flowers in the Moats’ garden. “He is lethargic, but I think it’s because he’s old. If he’s hungry though and wants what you have, like a piece of salmon, you better believe he’s active!”

“Bailey, Banks, and Biddle!” exclaimed Anne Stunz of Vienna, owner of 10 year old lab/hound mix Bailey. The story of how their current dog got its name lies with the name of the famous jewelry retailer founded in 1832. “We first had dogs named Banks and Biddle. They were these older dogs that we adopted, we didn’t name them because they were rescues. So when we got him [Bailey] after they died of old age, he was called Stacy. We thought that it didn’t sound very manly for a boy dog, but we couldn’t bring ourselves to get the right name. Anytime I wanted to call him something I’d go with “B” sound because we were used to calling our animals B names. So we decided to just give in and give him a B name and when we asked him, ‘Could we call you Bailey?’ he responded very positively!” Bailey is almost 100 pounds and loves to play fetch in their spacious backyard. He is the epitome of a gentle giant. 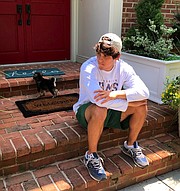 Henry Ross of Vienna with a German Shepherd mix named Rocky he brought to Mom for her birthday.