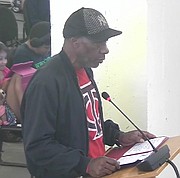 ACPS custodian James Smith addresses the School Board about proposed budget adjustments on Thursday, May 23.

Approaching the end of its annual budget cycle, the School Board voted on 11 proposed additions and deletions to tweak its FY 2020 budget, including retention of eight school custodians facing outsourcing and addition of a full-time restorative practices coordinator.

Earlier in May, after pushback against his plan to accelerate the outsourcing of 30 school custodians, Superintendent Gregory Hutchings recommended adding $1.8 million back into the budget in order to retain 20. The schools would still privatize the remaining 10 positions, currently occupied by school employees with less than five years of full-time experience.

In 2007 the School Board decide to outsource through natural attrition (voluntary jobs changes), but hasn’t stuck to the plan. The division outsourced custodial services for some schools but not others, and subsequently hired new custodians onto the schools’ payroll.

School Board member Michelle Rief proposed an additional $320,000 to retain the remaining custodians with less than five years. She proposed offsetting the cost by reducing increases — which she distinguished from “cuts” — in other areas. For example, she’d trim human resources salaries and technology services budget.

Custodian James Smith spoke during the School Board meeting on May 23: “When I started working, I was promised that I would be able to start working full time after one year. That has turned into nine years. I am now four years in as a full-time employee.”

Rief said: “We made the mistake of hiring these workers we weren’t supposed to. We were supposed to have an attrition plan in place. … It was a failure on our part, and we’re asking these workers … to pay the price for that mistake. I think that that’s unfair. … I think that making a choice like this harms our reputation as an employer.” As the city’s largest employer, “we [the school division] can set a bar for how workers should be treated.”

She added: “We can tell ourselves this story that these contracting companies have some magic formula to come in and do this job ‘more efficiently’ [finger quotes] and save money. But that’s just not true. Cleaning buildings is not rocket science. I don’t mean to diminish the work of our custodians, because they do an amazing job and I believe that all work has dignity. But we don’t need to go outside Alexandria to find expertise to clean our buildings. … Is this a reflection of our values … ? We’re proud to live in a city that prides itself on being inclusive. We want people who work here to be able to live here and raise a family. We want people to be able to retire with dignity. We wring our hands about income inequality and the lack of affordable housing and the high percentage of our students living in poverty. … It’s in moments like this and decisions like this. … We need to think beyond just balancing next year’s budget.”

Restorative practices are a framework for maintaining and repairing community relationships when an infraction, such as a fight, has occurred. They may take the form of “community circles,” wherein a teacher guides small group discussion.

School Board members and staff broadly expressed a desire to address the demographic imbalance in suspensions, but also doubt that hiring a Central Office restorative practices coordinator represents the best option.

Hutchings and his staff would prefer a bottom-up model, where liaisons in individual schools would help train teachers in-house.

Hutchings said: “Just putting in a coordinator is not going to solve our problems. We’re going to have to get the buy-in from our staff so that we are utilizing the resources that we currently have in place with fidelity. … It’s too much for one person, or two people. So we are going to have to rely on teachers, administrators, support staff to help us with community circles or implementation of other facets of restorative practices.”

School Board member Meagan Alderton said: “We want to jump on these band wagons for a fix, but we don’t have the foundation for it. … Restorative practice should be a layer on top of some very basic things that should be happening in our schools.”

She added: “I think it’s easy for staff to lean toward more punitive things like suspension because they don’t even know with the expectation are. … Should we be on a restorative practices trajectory at some point? Absolutely. But I continue to caution us to really do it right, and not just do it because it’s the things we’ve heard about or read about.”

The School Board decided unanimously not to bring Thorton’s proposal to the final budget vote.