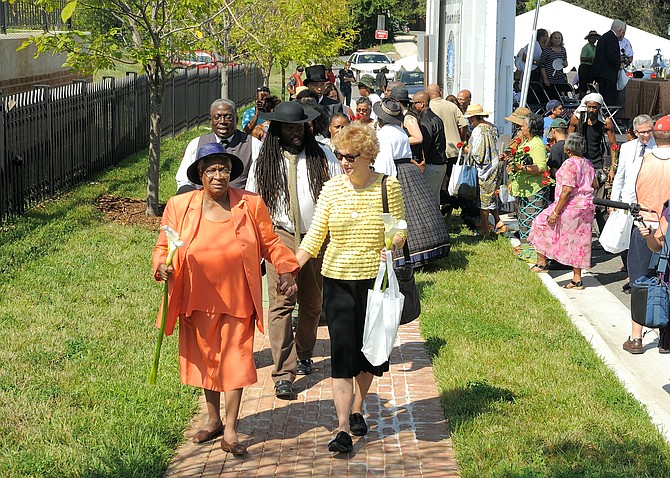 Over 20 years ago, two ladies, who were concerned about the Woodrow Wilson Bridge Expansion Project impacting their neighborhoods, took an active role on the project. The two were from different neighborhoods and on opposite sides of what they wanted from the developers of the project. Unknown to them at the time, an issue would bring them together in order to fight a bigger battle ahead. Lillie Finklea and Louise Massoud combined their skills in activism that would help them fight to restore the forgotten Freedmen Cemetery.

Those two ladies had more in common than they realized. Both of them were born in Washington, D.C. They were about the same age, and they had a strong will to wage a battle. In the Woodrow Wilson Bridge Expansion Project Plan, it was discovered that a cemetery was located under the gas station at Washington and Church streets. The two ladies learned about the cemetery in the Washington Post, including the history of the cemetery. This cemetery was close to their neighborhood. They wanted to take an active role in raising awareness to the citizens of Alexandria. Lillie and Louise started a Friends of the Freedmen Cemetery group and, with several other volunteers, they helped to bring a national awareness about the existence of the cemetery.

It was a remarkable success for those two women from different backgrounds to come together and secure a future site for the Freedmen’s Cemetery. They made a difference to all those descendants of the cemetery who had no idea that they had ancestors buried there. Through Lillie and Louise’s efforts, they solicited help from the former Mayor Bill Euille, City Council members, the developers of the Woodrow Wilson Bridge Expansion Project and then Congressman James (Jim) Moran.

Lillie and Louise lobbied the local and Federal authorities for help for the cemetery, and money was set aside to develop the cemetery into a Freedmen’s Memorial Cemetery.

The two ladies are now about 80 years old. The Freedmen’s Cemetery is now a beautiful memorial park for over 1,700 people who died as a result of wanting their freedom. Things might have been different for the future of this cemetery if it hadn’t been for those two ladies who came together to fight for the cemetery to be recognized, and to be celebrated for its role in history.

During Memorial Day, there were many cars driving down Washington Street and many of those travelers may have looked over and saw a big statue at the Freedmen’s Cemetery, and wondered about its history.

Today, Louise lives in the Shenandoah Mountains of Virginia, and Lillie still lives in Alexandria under the care of her family. Back in 1997, the former Mayor Euille issued a proclamation, declaring the last week of May as a “Week of Remembrance of the Freedmen’s Cemetery.” We’re indebted to Lillie and Louise for their time and effort they spent in making the Freedmen’s Cemetery a reality.

Many people would wonder if two individuals can make a difference. Louise and Lillie did not ask that question, they rolled up their sleeves and they accomplished what others did not. They restored a piece of African American history that was unknown to many, and they made the descendants of this cemetery proud for their active role in helping to keep history alive.

For the month of May and throughout the year, I salute the two women for their tireless efforts in making sure we do not forget those who fought for freedom.