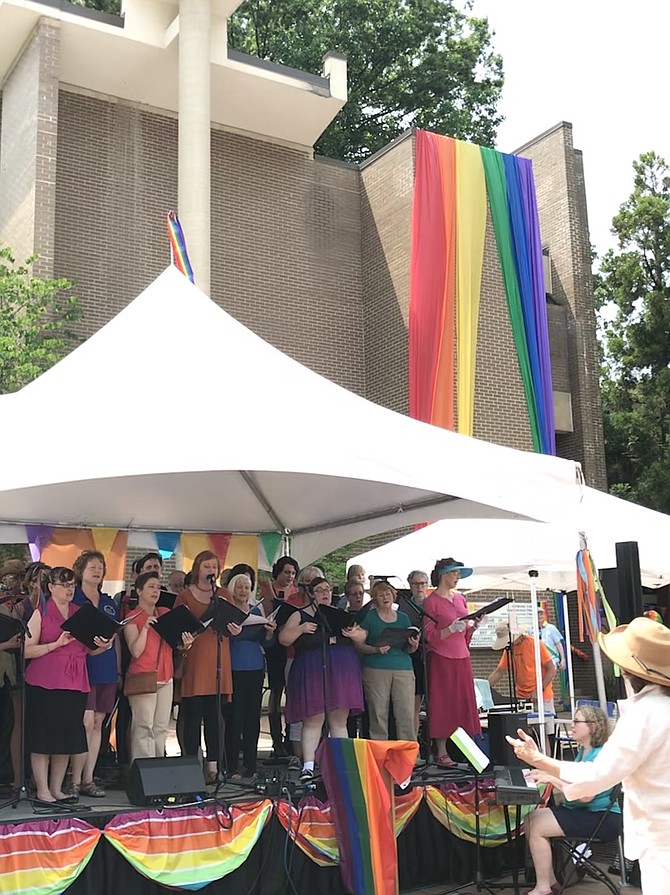 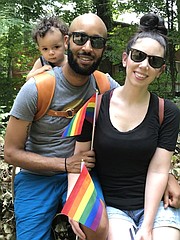 The Broady family of Reston shows their support for the LGBTQ+ community at Reston Pride 2019. 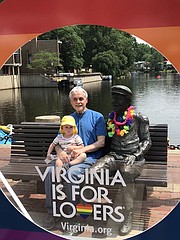 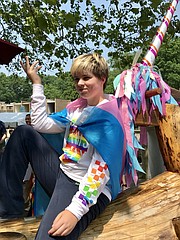 Thomas Anderson, 12, of Centreville wears his rainbow-colored shirt in support of the Reston Pride Festival. 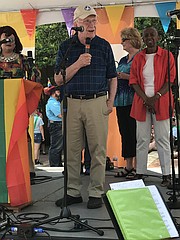 "We are excited we brought Reston Pride to Reston, to highlight our LGBTQ+ community. Previously this community was not particularly visible here. However, inclusion and diversity are the hallmarks of Reston's history, and so we are delighted to expand that visible inclusion," said Reverend Doctor Debra W. Haffner, Minister (UUCR).

"We wanted LGBTQ+ people celebrated. Everyone, regardless of their sexual orientation or their gender identity, deserves the same rights and responsibilities in our community," said Reverend Haffner.

Paul Douglas Michnewicz of Reston echoed Heffner’s remarks but added: "Celebrate in the open, in public."

Reston Pride has not been deemed a "political event" according to Reverend Haffner who said that they turned down requests from political action groups to participate. However, local political figures such as guest speakers Virginia Sen. Janet Howell (D-32), Supervisor Cathy Hudgins (D-Hunter Mill) and Del. Ken Plum (D- 36) lent verbal support.

"It is entirely appropriate that the Pride Event is held in Reston. We have always talked about openness to all people. It's about time we display our support for the LGBTQ+ community," said Plum.

"With the celebration of Reston Pride this weekend, the Reston community continues to be welcoming to all," said Hudgins.

“I am beyond honored and incredibly excited to be co-hosting this year's Reston Pride," Knyght posted on Facebook.

Reverend Haffner explained they designed Reston Pride to highlight, celebrate and support the LGBTQ+ community in the Greater Reston area, and celebrate the 50th anniversary of the Stonewall riots in New York. She said that historically public opinion for same-sex marriage shifted after the Supreme Court decision 2015. "There was a big bump toward acceptance," she said.

Justin Broady of Reston visited Reston Pride with his wife Sara and baby Holden, 1 1/2. Justin spoke about love. "Being in an interracial marriage, we believe love is love. It was a battle for us to get married, and now others are fighting the same battle... my brother is gay," he said.

"My observation is that there is very wide acceptance of lesbian and gay people, including that they should not be discriminated in the workplace," said Reverend Haffner. Thomas Anderson, 12, of Centreville wore his rainbow-colored t-shirt. "First thing, I am gay. And I'm very accepting of all the genders and sexualities. I'm in PFLAG, an organization for gay pride with a gathering for trans kids in the area."

REVEREND HAFFNER spoke about how public conversation and support for transgender people, people who are bisexual, and non-binary people "lags far behind."

"I want to leave people with two things. First, everyone, regardless of their sexual orientation or their gender identity, deserves the same rights and responsibilities in our community. We need to celebrate sexual and gender diversity," Reverend Haffner said. "And second, that ongoing support for the LGBTQ community is more than coming to a Pride festival. It's an ongoing commitment to ensuring that all of our neighbors can thrive."

Pastor Tim Ward of Restoration Church Reston attended Reston Pride. He said, "I long for a church that says that each person is of sacred worth and value and does more than says it, but actually lives it."