Lake Braddock Secondary School: Among Many Successes, the Greatest is Overcoming Failure
Votes

Lake Braddock Secondary School: Among Many Successes, the Greatest is Overcoming Failure

Speakers applaud graduates on their many successes and prepare them for failures. 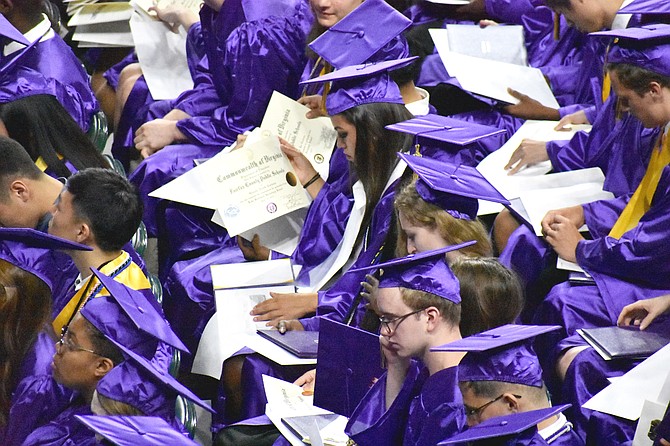 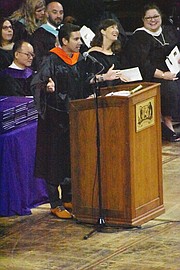 After graduation, Ethan Sohn will be attending the United States Naval Academy. He plans to major in Cyber Operations. After completing his time at the academy, he wants to do something computer related, possibly on a submarine or as a pilot.

Lilly Weir will attend the University of Tennessee at Nashville in the coming school year. Once there, she hopes to become a Certified Nurse Aide. In five years, she sees herself doing something in neuroscience or sports medicine.

Sydney Small is enrolled in the State University of New York College of Environmental Science and Forestry to study environmental law. She hopes to later pursue a law degree at the same school.

In August, Niva Sainju will begin her studies in business at Virginia Commonwealth University. Beyond that, her future plans are open and she hopes to discover her interests in college.

Arjan Sandidge will attend Northern Virginia Community College for two years before transferring to either Virginia Commonwealth University or James Madison University. He wants to study computer science and work at a software development firm in the future.

Much of the time at the Lake Braddock Secondary School graduation, held on Monday, June 10 in the EagleBank Arena, was spent in recognition and celebration of the impressive class of 2019.

Of the more than 680 students graduating, “73 percent of the class has earned a 3.0 grade point average or higher,” said Principal Daniel Smith during his address. He also commended the 157 honor graduates for earning above a 4.0 GPA.

Associate Principal Laura Waterman followed Smith and recognized the acts of service the graduates had performed in the community. She thanked the students for contributing more than 25,000 hours of volunteer work during their high school careers. She also acknowledged the 11 students joining the military upon graduating.

Director of Student Services Alka Howard then praised the outstanding scholars of the class. She congratulated the students who received the designation of AP Scholar after completing three or more Advanced Placement exams with a score of 3 or higher. The 232 students eligible for the Virginia Early College Scholars Program were also recognized for completing an Advanced Studies diploma with a “B” average or higher and taking 5 or more AP classes, or the equivalent of 15 transfereable college credits.

The keynote speech, however, reminded graduates that success in the future might be harder to attain. Adam Tuss, transportation reporter and anchor for NBC Washington, gave advice to the students by formatting his speech as a letter to his 18-year-old self. “Hey, Adam. It’s Adam,” he began. “Life is about to happen. Life in all its best, most glorious, and sometimes most challenging forms is waiting on the other side of this stage today.”

Tuss warned that life after graduation “will not always be easy,” he said. “And that, perhaps, is the single most important lesson in life that so many of us grapple with.”

He then shifted his focus to resilience. Though life will be difficult, he told the students that more important than the challenges themselves are the responses to them. He recalled living in New York City trying to begin his journalism career. “While you believe in yourself, Adam, these bosses are going to tell you that you’re not ready,” he said to his past self. “You’re going to doubt yourself. You will get knocked down.”

But, Tuss, of course, later became a successful reporter in Washington, D.C. He described achieving his goals despite criticism and obstacles as the “sweetest moment.”

“You learn from mistakes. You don’t have to be perfect. Life is constantly teaching you that. You should have moments where you fail,” he continued. “But it matters how you respond from that failure. You get to control what happens in those moments.”

He then turned his attention to the students: “There are going to be times, graduates, when life knocks you down,” he said. “But you can pass all of those tests, every single one of them, if you don’t stay down. And you simply get up.”