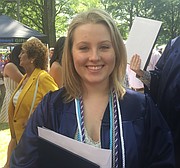 Grace Cryblskey: “I’m going to Indiana University of Pennsylvania and will be studying physical and health education and minoring in special education. In 5 years I’ll be working in a school.”

Charlotte Bushman: “I’ll be going to East Carolina University and will be studying to be a nurse. I hope to eventually work in a hospital.”

W.T. Woodson saw their senior class of 2019 graduate this past Tuesday, June 4 at Eagle Bank Arena surrounded by hundreds of family and friends. This class has made its mark at Woodson as 2019 was one of the most athletically successful years in school history. The main speaker for the ceremony was principal Carlyn Floyd who expressed her high hopes for the graduating class, stating that she believes “this class will go on to change the world.” When Woodson seniors were asked to rise if they achieved an average GPA of 4.0 or higher, it was hard to keep count of how many students stood in a moment that defined the talent of this class.

Graduation caps were decorated with logos from various schools from both instate and out of state schools such as Clemson, University of Pennsylvania, Virginia Tech as well as University of Virginia. The ceremony also featured student participation including speakers from SGA and other clubs as well as a student conducted national anthem at the beginning of the ceremony.