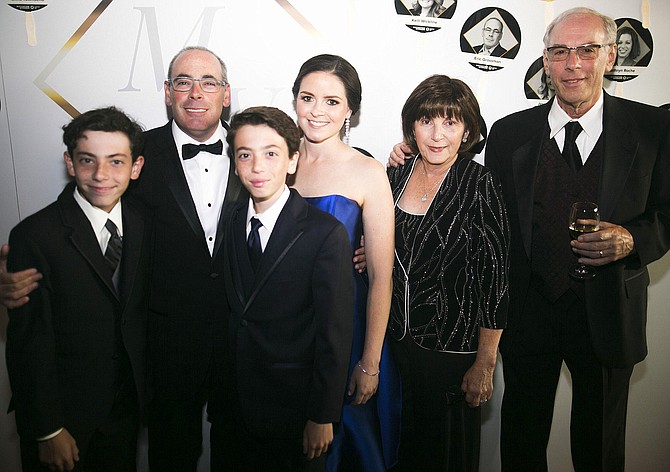 Fairfax City resident Eric Grossman has been named the 2019 Man of the Year for the National Capital Area’s chapter of the Leukemia & Lymphoma Society (LLS). Vying against 23 other people, he raised the most money of the male candidates during a 10-week fundraising campaign.

As a result, he and the LLS Woman of the Year, Jessica Burgess of Annapolis, Md., were honored June 1 at a grand-finale gala at The Anthem in Washington, D.C. They received glass statuettes and will have their names linked to an LLS-funded research portfolio connected to groundbreaking, innovative, blood-cancer breakthroughs.

“My grandparents, who are no longer with us, long ago imparted the wisdom that – while it’s nice to do well – it is imperative to do good,” said Grossman. “Supporting an organization as impactful as LLS is unquestionably what it means to do good. These fine folks are going to cure – are curing – blood cancers.”

FROM MARCH 20 THROUGH JUNE 1, all 24 candidates raised money in honor of this year’s Boy & Girl of the Year, leukemia survivors Grant and Lucia. LLS Senior Campaign Manager Allie Krafft said they were chosen because “They are sources of inspiration for their positive attitudes and determination to never give up.”

Beth Gorman, Executive Director of the National Capital Area chapter, also praised the “incredible men and women who participated in the campaign and help us make strides in treatments for blood cancers. These 24 candidates are true champions of the LLS mission.”

Grossman, an attorney and partner at DLA Piper LLP in Reston, was inspired to get involved after being nominated by his friend, Erika Chambers, who’d previously participated in the competition. And, said Krafft, “He also has two, young boys and wanted to set a good example for them.”

He raised $517,078 through his corporate connections and personal donations. “He also brought in some big-ticket, auction items for our grand-finale gala,” said Krafft. “People could raise money until 9 p.m. that night.” Noting that 82 other LLS chapters also do this campaign, she said Grossman is now in the running for the LLS national Man of the Year.

“The money goes toward funding research, including for pediatric cancers,” said LLS Marketing Manager Jasmine Clay. “We also do patient advocacy and make sure patients are able to get the services they need.”

Grossman’s fundraising page will stay open for contributions until June 30. To donate, go to www.mwoy.org/nca and click on candidates and then his name. Proud of his efforts, Krafft called them “amazing. We are so thankful; he left no stone unturned and really put his all into this.”

“I have been very fortunate to build a trusted relationship with many successful companies and entrepreneurs, over the last decade, as a corporate partner at DLA Piper,” explained Grossman. “That network of generous souls did not need much convincing to step up and contribute in a big way because they knew this was important to me, and I wouldn’t have asked, otherwise. And more importantly, they knew LLS was a game-changing organization serving patients and families in need in our community and beyond and that their contributions would actually make a difference.”

In his acceptance speech, he said, “This is truly a humbling and amazing honor.” Then, acknowledging all the others who competed, Grossman said, “You know, the LLS team advertises this as a 10-week sprint. But they fail to mention the four months they make you prepare before you even get in the starting blocks, so I know what you have given of yourselves, and we would all agree it is well-worth it.”

He expressed appreciation to campaign leaders John Brookbank and Evelyn Akers for their leadership and support, as well as all the LLS staff members. And he recognized Grant and Lucia and to their families “for being a daily reminder during this campaign of just how important this mission is.”

GROSSMAN next thanked his team, Blood, Sweat & Tears, for joining his fundraising efforts. Members included his brother Lanny; his sons, Ethan and Alex; his girlfriend Desire Termine; and his parents. “I was blessed to be supported by literally hundreds of different people and organizations along the way,” he said.

“Taking on this challenge was about living up to the values my family modeled for me,” continued Grossman. “Both of my parents, my brother and even my kids – at only 12 and 14 – have routinely and meaningfully given of themselves for those in need.”

Furthermore, he said, “If we can keep up the tremendous, collective effort embodied in this campaign and finale gala, maybe sooner rather than later, we can make the LLS Man and Woman of the Year campaign obsolete and all just get together once a year for a nice party with the money LLS has left over.”