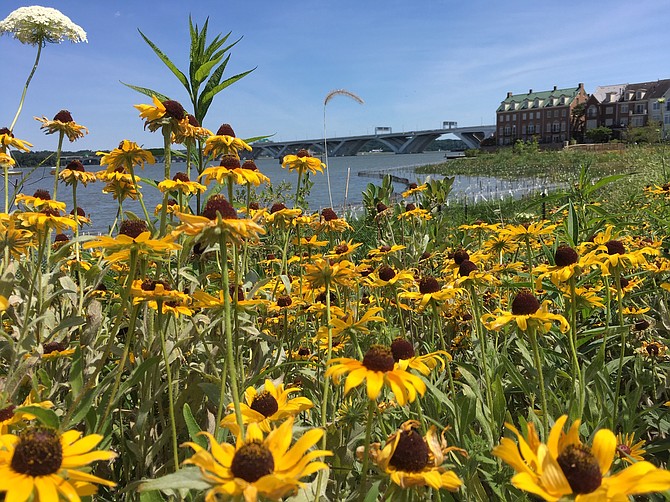 Although the ribbon was cut for the completion of the Windmill Hill Park Shoreline Project last November, it took a rainy spring and hot days in June for the “living shoreline” along South Union Street to come alive. On Sunday, June 23, the temperatures were in the 80s, the sun was out and the new garden was awash in yellow flowers that are favorites of butterflies and bees.

“We do have pollinator flowers,” said Jack Browand, division chief at the City of Alexandria’s Recreation, Parks & Cultural Activities. The new plantings on the shoreline and surrounding parks are 75 percent grasses and 25 percent flowering plants, he said. “It’s natural vegetation, it’s turning out great,” he said.

But this area of the shoreline a few blocks south of King Street was in bad shape at one time, and the city stepped up to address it, and came up with a plan in 2003. At that time, the wooden pier work in the water that supported the retaining walls was rotting away and the concrete bulkheads were cracked. It was clear something had to be done, so the city looked at options that included rebuilt bulkheads, rip rap stone supports or the living shoreline, which turned out to be everyone’s preferred choice. In June 2015, the City Council approved the living shoreline plan, and construction began in September 2016.

To the naked eye, it’s all city parkland, and the vegetation is rooted in the soil to keep it from washing away into the river. Upon further examination though, the parks are spliced up, and the city project includes the bulkhead of a former shipping area where there is now a rainwater drainage creek.

Sophia Farino comes in from her home in the Fairfax County portion of Alexandria, and likes the river views from South Union Street. “It gives a really nice view of the water and the bridge,” she said.

The northern part of the shoreline is Shipyard Park, and maintained by the Harborside Condominium Homeowners Association with permanent public access to the riverside park and public wharf, according to city information. Then there’s Windmill Park on the east and west side of Union Street, and a new dog park just south of that, and then Ford’s Landing City Park. It all seems like one continuous piece of land. “This area’s very complicated,” said Browand.

The city planted aquatic plants close to the water and along the shore, and pollinator flowers on the dryer parts of the parcels. Currently there are strings and stakes “to keep the geese out” who eat the new plants before they have a chance to root. “Projects within this scope can take a couple of growing seasons,” Browand added.

Like everything else in Old Town, this area has a history too. Beginning in 1851, the Orange & Alexandria Railroad used the Wilkes Tunnel to get to the bulkhead at the Potomac River. The trains stopped rolling through the tunnel in 1975, but Browand did say they found rails and materials under the dirt while clearing the land for this project. “That whole area was industrial,” he said.