‘Without Some Sort of Strategy…’ in Alexandria
Votes

‘Without Some Sort of Strategy…’ in Alexandria

Ahead of budget public hearing, council considers long-term investments, especially in schools and other city facilities. 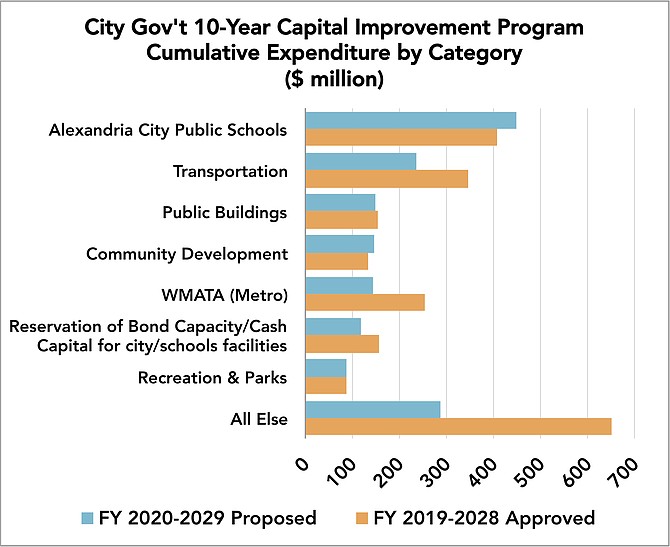 With citizens’ chance to weigh in at the city budget public hearing coming up, here’s a quick look at what’s gone before City Council regarding long-term capital investments.

The School Board’s pending request to council for $479 million over 10 years includes five new school builds and replacements to address ballooning enrollment. The division as a whole operates at 110 percent of its design capacity. Five elementary schools operate at 120 percent, or more. The division forecasts enrollment will grow by 8 percent over the next 5 years.

“A demand for labor, material costs and fuel costs seem to be going up,” said Arthur Wicks, the city’s capital budget coordinator. Next year “you’re going to see some of these construction estimates going up, some significantly.”

“It will be impossible, without some sort of strategy, to fund all these additional requests in the future if we’re doing things the same way we’ve been doing them in the past,” he said. Still, he wants to instill a positive public “narrative” about the schools’ spending, saying: “The dollars we receive from the city [have] a significant impact on the achievement of our students.”

Alexandria maintains an “extraordinarily healthy” low amount of debt, which “most local governments wouldn’t come near,” said Jinks. Still, he worries about the creeping costs of increased borrowing, saying: “[The public schools’] capital needs have and will continue to put significant pressure on future operating and capital budgets. These needs will only increase in the years to come, and will be a major driver of substantially increased school debt service in FY 2021 and beyond.”

“The added debt service … really is the major driver of the [city’s structural] deficit, the gap that needs to be closed” year after year, he added later.

“When they [the School Board] prepare the CIP, they say, this is what we’d like to spend. [But] they don’t have to deal with how it’s paid for,” said Jinks. “If a process were put in place where the School Board, as part of their CIP, would recommend a tax rate, I think that would help in balancing how you pay for it with the timing” of projects and debt issuance/retirement.

As the Gazette Packet goes to press, council and the School Board are meeting in a joint budget work session. A recording of the meeting, plus associated materials, will become available later this week. Follow the “FY 2020 Budget Resources” link at www.alexandriava.gov/Budget.

Including all funding streams, the city is poised to invest some $60 million in the so-called Witter-Wheeler Campus. The campus comprises a mile-long stretch along Duke Street of 15 contiguous public facilities, some of which might be combined.

Council urged city staff to think big as they hone plans for the area.

“It’s a big property, it’s a pretty low density today. It’s an area where we could go up, depending on the use,” said Mayor Justin Wilson.

For such “a rare opportunity for us to do something unique,” the proposed investment “doesn’t suggest to me that it’s going to be a very ambitious plan,” said Councilman Mohamed “Mo” Seifeldein.

Jinks earmarked $51 million over 10 years for reconstructing and resurfacing major roads. Overall, city streets receive a condition assessment of 58 (“fair”), on a scale of 0-100.

“The city has actually under-invested for many years in [road] resurfacing,” said Yon Lambert, the city’s transportation director. “Although we have been spending quite a lot of money [in recent years] on the citywide road network, we cannot make up for those many years of deferred maintenance just in a short amount of time.”

Regarding the city’s $17 million Smart Mobility initiative, Lambert said: “There’s a lot of new thinking in transportation that code — as in computer code — is ‘the new concrete.’ Obviously with the Potomac Yard Metro and the West End Transitway, we’re still … putting a lot of concrete and steel out there. But cities are increasingly realizing that they can make more efficient use of [their] right-of-way” using technology.

The city’s plan includes traffic signals wired into what Lambert calls “a central brain in our traffic management center;” signals that can self-adapt to traffic conditions; and 90 traffic cameras and other sensors citywide.