When Staging Is Murder
Votes

When Staging Is Murder 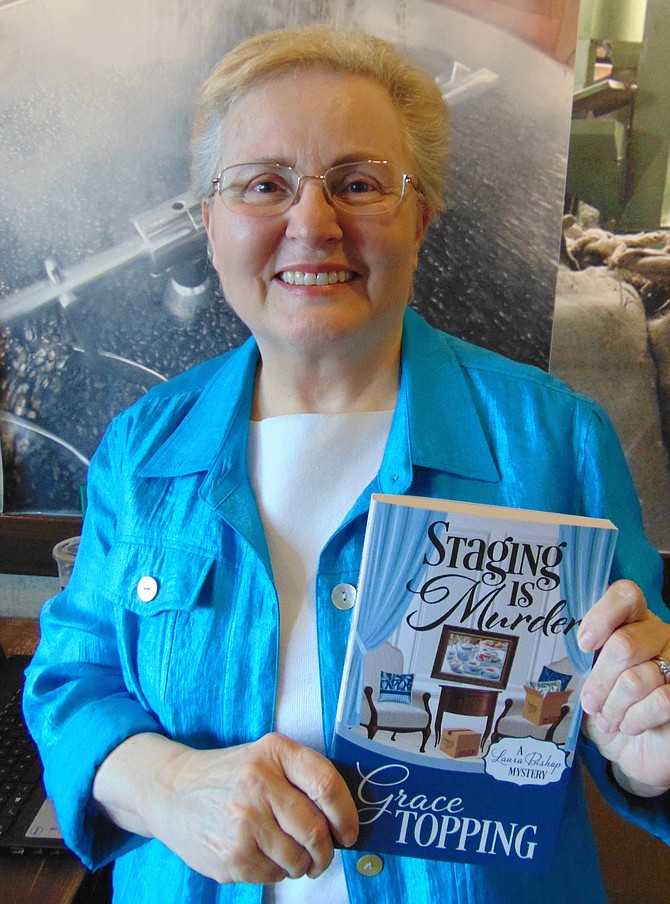 Author Grace Topping of Fairfax Station with her book, “Staging is Murder.” Photo by Steve Hibbard.

When she worked for 28 years for Federal Deposit Insurance Corporation, Grace Topping of Crosspointe in Fairfax Station was accustomed to writing pretty boring stuff. The former technical writer/editor and IT specialist wrote about computer systems that dealt with banking. Now retired, she can write what she pleases, so she’s been cranking up her creative juices by penning the murder mystery, “Staging Is Murder.” After 10 years of perfecting it, the book is going live on April 30.

Topping has a three-book contract for her Laura Bishop Mystery Series; she’s in the midst of writing the second which will be delivered in August. In the story, her main character is Laura Bishop who is changing careers and leaving the IT field. She has decided to become a home-stager, someone who helps a homeowner prepare their home for sale – making it attractive to sell fast. Her first decorating commission is a 19th century mansion that hasn’t been updated in decades. She’s trying to get experience when a body falls from the laundry chute and lands at her feet. In the story, her assistant is charged with the murder and to help clear him and save her business, she finds herself trying to identify who the murderer is.

TO DO HER RESEARCH, Topping would go to conferences, take classes and read books, and as she learned things, she would revise her manuscript. “By the time I finished, I had written 38 versions of my book,” she said.

What got the ball rolling was she attended a Malice Domestic Conference, a conference for fans of mysteries in the tradition of Agatha Christie. “I got to meet authors of books I enjoyed, people whose mysteries I read. It was a thrilling experience; I thought these are ordinary people. Maybe this is something I can do,” she said.

She got the idea for the home staging hook because she had watched programs on HGTV on home staging. “I realized it hadn’t been done a lot. I had a knack for it. I knew enough about it. I had a good feel for it. I’ll make this the interest of my main character,” she said.

In the book, she provides home staging tips with each new chapter. Some examples include: “Consider slip covers to camouflage old or worn upholstered furniture;” and “Brighten rooms by removing heavy curtains or removing or cleaning dusty blinds.”

She tried to make the book authentic by contacting staging studios in Texas and following them on Facebook. “They reviewed my book, gave me a few suggestions, so I felt like it was blessed by a group skilled home-stagers,” she said.

Topping said it’s important to educate yourself on the business; not to go it alone; to join a writing group; and take online classes to perfect your skills. “Connect with other writers,” she said. “They bolster your spirits when you’re low. They may lead you to publishers.”

She recommends the group Sisters in Crime (www.sistersincrime.org), an organization established to promote women crime writers, which was started by writer Sara Paretsky (best known for her female protagonist V.I. Warshawski). Topping is the vice president of its Chesapeake Chapter.

She said the mystery writing community is very supportive and encouraging. She joined Guppies (The Great Unpublished, http://www.sinc-guppies.org), the online chapter of Sisters in Crime, which holds classes for unpublished writers and gives success stories. “I don’t think I’d be published today without the support of the Guppies,” she said.

She does her own research by taking field trips to places like the Manassas Crime Lab and the FBI Headquarters to help her write more authentically. “You don’t want to be saying, ‘He pulled out a revolver when it was a pistol;’ you need to know the difference between the two,” she said.

TOPPING is in the midst of promoting her book; she formerly served in the Navy for seven years and is married to husband John, who is originally from England. The couple has two grown daughters – Lesley and Laura. Topping’s book can be found in pre-order on Amazon.com, barnesandnoble.com and her own website: www.GraceTopping.com.