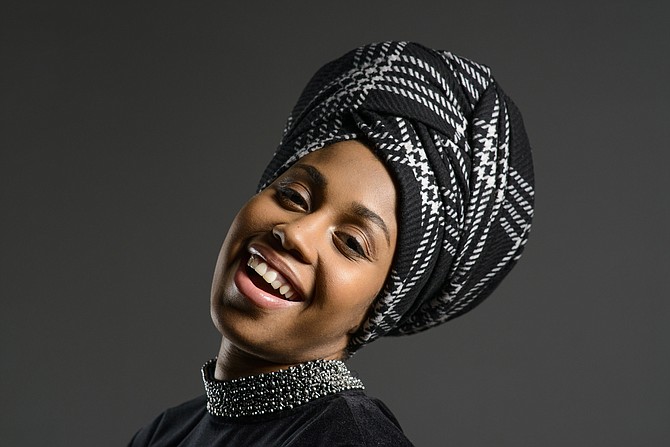 “Jazzmeia Horn is one of the brightest lights in the jazz world today. Her vocal fireworks and delightful stage presence are thrilling,” said Paul Douglas Michnewicz, director, Arts and Events, Reston Community Center. “Her new album, ‘A Social Call,’ is an important message of community building and the importance of joy.”

Grammy-nominated Jazzmeia Horn is a singer with a growing reputation and critical acclaim. She described her musical tastes as “Jazz, with soulful influences of the African diaspora.“ She has a repertoire of jazz standards and other musical genres along with her very own creations.

Horn is especially known for her “scat” singing style. “Scatting is a form of improvisation and improvisation is a natural ability to adapt to life so it is essential for me to be able to improvise in this world and especially as a woman,” said Horn. “As a black woman, improvisation is imperative for survival. This has been my experience with college and academia, in the workplace, as a musician, in the industry, as a mother, as a band leader, and as an artist.”

“I love having the ability to express myself when needed. Music is essential for aiding in the healing process and improvisation becomes the source of healing for both myself and those in need in my audience,” added Horn. “My intentions are to share this experience with others so that they might be inspired to create their own experiences.”

Asked about her album, “A Social Call,” Horn said, “Firstly, it is important to me that the title of my album, ‘A Social Call,’ not be mistaken for A Social Change. A Social Call was intended to do just that – a call to raise awareness around social injustice. Songs like ‘People Make the World Go Round’ are songs that were social calls during my mother’s generation, and those social issues are still issues today, so it would only make sense to reiterate my reality with a different sound; hence, my arrangements.”

What can patrons expect at Horn’s concert with musical accompaniment at Reston CenterStage? “The audience can expect an experience that they have not experienced before. This experience will also be one with a great deal of joy,” said Horn. “We look forward to giving the audience a great show and co-creating a great experience!”

“Be open to learn, feel, express, and begin a new journey via the music,” added Horn.