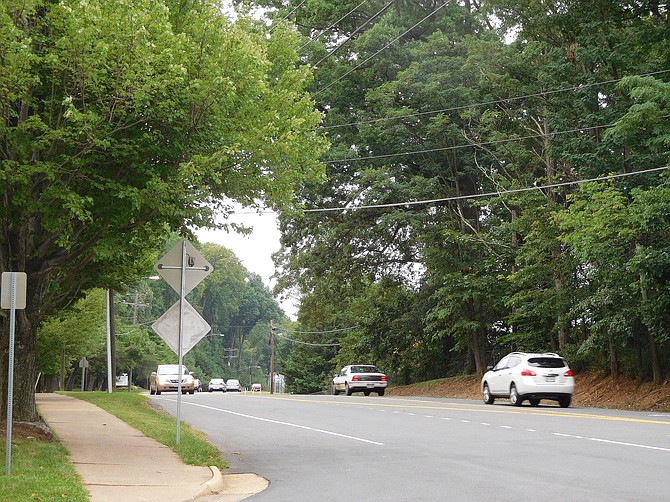 As things stand now, every few blocks of Old Lee Highway have a different look and feel. So, without widening the road or disturbing too many trees, the City wants to make it more cohesive, with a plan that works well for diverse users, including vehicles, buses, bicyclists and pedestrians.

And at a recent Fairfax City Council meeting, the members awarded a contract not to exceed $815,731 to Rinker Design Associates (RDA) for phase II engineering services for this project.

Councilman Michael DeMarco asked about the likelihood of the City getting this last bit of revenue-sharing funds. And Transportation Director Wendy Block Sanford replied that “Top priority are projects that have already received revenue-sharing money,” so she didn’t anticipate Fairfax having any problems in this respect.

Old Lee runs 1.5 miles from North Street to Fairfax Circle and is one of the City’s main streets. Some 13,000 vehicles a day travel on it, including those going to Daniels Run Elementary, St. Leo the Great Catholic School and Fairfax High.

THIS TWO-LANE ROAD also leads to multitudes of homes, businesses and stores, plus the police station, Sherwood Community Center and Van Dyck Park. Some sections have on-street parking, and there are 21 bus stops.

The Old Lee Highway Multimodal Improvements project will improve this road from Layton Hall Drive to Ridge Avenue by providing continuous bike and pedestrian facilities along that corridor. It will do so via a combination of sidewalks, shared-use paths and separated bicycle lanes, where possible. The crosswalks will be high-visibility and the sidewalks will be ADA-compliant.

In phase II, it will prepare preliminary, 30-percent and 50-percent design plans, determine more precise right-of-way impacts and further involve the public and other stakeholders. It’s currently anticipated that one, traffic-signal modification will be needed at the Old Lee Highway/Layton Hall Drive intersection, plus a new traffic signal at the intersection of Old Lee Highway and the Sherwood Center.

At an earlier work session, Mark Gunn with RDA called it an “extremely exciting project, unusual because of all the different uses there. Today, there are discontinuous sidewalks and large areas of unused asphalt, and we want to create an environment that encourages everyone – from experienced bicyclists to moms with children – to reach their destinations safely.”

Similarly, Ken Wright with Toole Design – also working on this project – said the protected bike lanes would be “completely separated from traffic and from pedestrians, to reduce opportunities for conflict. There are lots of driveways and intersections along this corridor, and we want bicyclists and pedestrians able to be seen by motorists.”

Mayor David Meyer said Old Lee is the “most-used road in the City for pedestrians – and not just for people going to destinations, but just out walking.”

Calling it “beautiful,” Councilwoman Jennifer Passey said it’s her favorite road in the City and a “great introduction” to Fairfax. She also anticipated the sidewalks and bike lanes to help with vehicle congestion during school drop-off times.

THE COUNCIL MEMBERS also discussed the possible undergrounding of utilities, but they were told it would add greatly to the project cost, as well as to the time it would take to complete. The way it is now, Sanford expects construction to begin around spring 2021.

Later on, the evening City Council approved the phase II contract to RDA, Councilman Jon Stehle also noted what a “special road” it is, saying, “We need to make both a safety and a visual statement there.” And Councilwoman Janice Miller said she was “pleased to see we’re talking about pedestrian facilities on both sides of the road.”

Councilwoman Sang Yi asked how long phase II would take, and both Sanford and Gunn said a year, followed by another year for right-of-way acquisition. Stehle then made a motion to approve the contract, seconded by Miller, with the Council approving it unanimously.