Carnival, music, sales of plants and more all part of the tradition of fundraising. 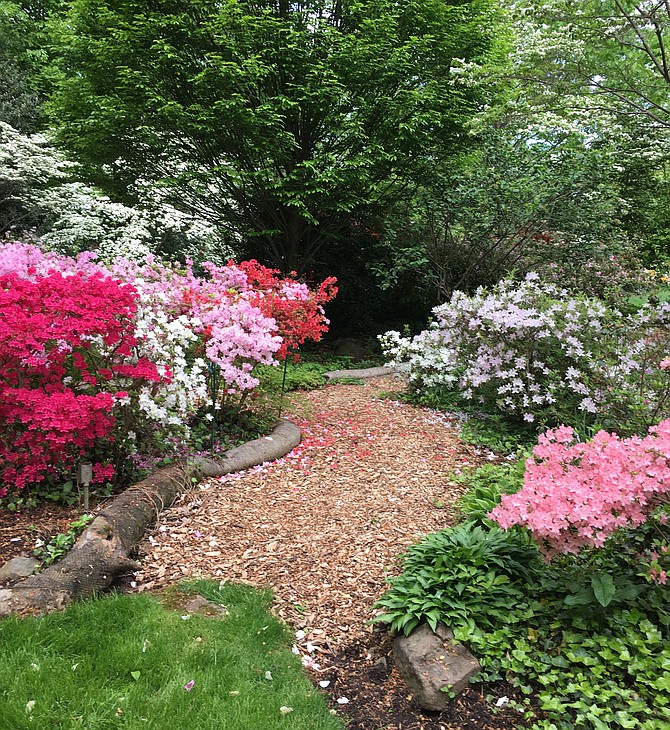 The two-and-one-half acre Perkins Memorial Garden at Landon School will be Open May 3–5 during the school’s annual Azalea Garden Festival. Photo by Peggy McEwan

The Landon School Azalea Festival, an annual celebration of natural beauty, fun, food and community, will be held this weekend, 10 a.m. to 5 p.m. Friday, May 3 through Sunday, May 5 at the school, 6101 Wilson Lane, Bethesda.

Since 1954, the school has opened the campus gardens to the public to view the more than 15,000 azaleas at their peak of color. Colors, that is. The gardens are abloom with pink, red, white, fuchsia, orange, and bi-color plants of pink and white, growing together along paths near the Bradley Blvd. end of the 75-acre campus.

The azalea gardens were not originally a part of the Landon campus, according to a history of the Festival written five years ago by Debra Graham, chair of this year’s Festival.

“Renowned economist Milo Perkins and his wife Theron built the garden to honor the memory of their sons, Landon students George and Randy, who tragically lost their lives within five years of each other during World War II. Thanks to Mr. Perkins’ post with the U.S. Department of Agriculture in the late 1930s and early 1940s, he was able to procure hundreds of azalea hybrids, and in 1944 he and Theron began to plant them in the garden. Soon, the garden was bursting with unique flowers,” Graham wrote.

Landon School purchased the Perkins’ home and gardens, located adjacent to the school campus, in 1954.

“That year marked the first-ever Azalea Garden Festival, as Mary Lee Banfield, [who, along with her husband Paul Banfield founded the school in 1929], sold azaleas from the garden to raise funds for the school,” Graham wrote.

Perkins Garden is also home to a number of hard-to-find specialty flowers, including Chugai and Kurume azaleas from Japan; Southern Indian azaleas; three Landon-themed azaleas: the Landon, the Landon Pride and the Princess Mary Lee (named for Mary Lee Banfield); and a selection of tree peonies and wildflowers.

In addition to walking along the paths surrounding Perkins House, festival goers can browse a selections of native wildflowers and perennials for sale under the Plant Tent, shop for upscale resale items at the Bearly Used sale in the gymnasium (the Landon mascot is a bear) or for new items among the 45 vendors in the Boutique.

“There will be an acre of carnival rides,” Graham said. “And a stage with music by Landon students and children’s entertainment.”

Graham said she and her committee are always searching for ways to add to the experience of festival goers.

The Festival is still a fundraiser for the school.

“It is a fundraiser for financial aid [for students] and teacher’s programs,” Graham said.

The three-day Festival is made possible by the help of 500 parent volunteers, Graham said.

This is her second year as chairperson of the event although she has volunteered for several years, she said. She has one son who graduated from Landon and one who is a junior in high school there.

Admission and parking at the Azalea Festival are free, with entrance on Wilson Blvd. For more information, visit www.landon.net/azalea.