At Budget Finish Line in Alexandria

(Click on "Download .JPG" to see large chart.) City Council whittles down proposed programming adjustments and add-ons in order to adopt a balanced budget on May 1. 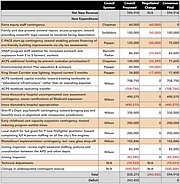 As the Gazette Packet goes to press, City Council will vote on its two-part budget, including funding for the public school system: a $947 million (including all funds) FY 2020 operating budget and a $1.6 billion 10-year capital improvement program.

The final version includes council’s final nibbling around the edges of City Manager Mark Jinks’ original proposal, in what’s called the addition-and-deletion — or “add/delete” — process. Having to shave off just a quarter-million dollars from their earlier proposed programming adjustments and add-ons in order to balance the budget, council wrapped up final horse-trading on Monday, April 29. Negotiations came down to a couple thousand dollars here and there.

“We’ve never been in a situation where the council has considered giving the School Board more of an operating allocation than they have requested in their proposed budget,” said Mayor Justin Wilson.

Under the city’s present budget policy, council can only appropriate an undifferentiated chunk of money to the School Board, but can’t tell the School Board how to spend it. Even so, some council members hope the School Board will put the additional funds toward retaining 30 school custodians on the public payroll. The schools administration earlier slated the custodians’ jobs for privatization.

“I would hope that this is used for custodians. … I’m very frustrated when we … want to talk about ‘equity,’” said Councilman Canek Aguirre, calling custodians “some of the most vulnerable within the school system, in terms of staff.” He added: “I don’t think it’s fair to tell 30 families that … likely the primary breadwinner is not longer going to have employment.”

Wilson cautioned that extra funding for custodians might become a continuous fixture in future budgets. Aguirre and Council Mohamed “Mo” Seifeldein said they support the extra money only as a one-time deal.

Council resisted trading any dollars out of Wilson’s proposed $200,000 to bolster the city government’s early childcare programs — one of the largest proposed adjustments.

In the future, Chapman wants to see funding for such programming baked into the city manager’s initial budget proposal, rather than put off to the end.

“I really don’t want to see this again as an add/delete issue. I think we as a community have said, … the children are our future,” he said.

“We do not want to move backwards on our kids,” said Councilwoman Amy Jackson.

Funding for most of council’s final budget additions will go into contingency, where it will await appropriation pending more detailed city departmental staff planning.