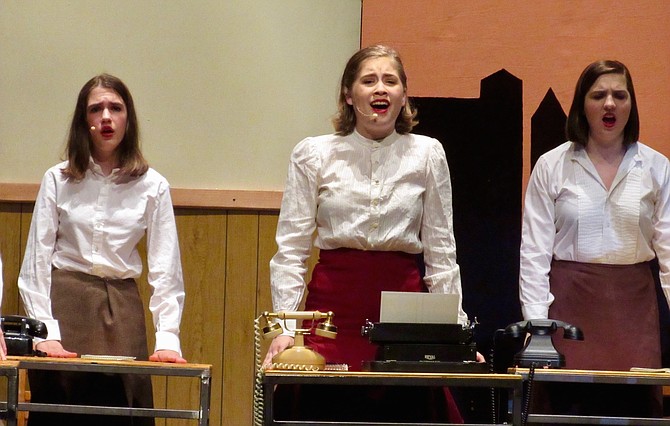 Learn how the other half lives with W.T. Woodson High School in their roaring rendition of “Thoroughly Modern Millie.”

“Thoroughly Modern Millie” is depicted in the 20s, the era of jazz, flappers, and modernism. Millie Dillmount (Hannah Black), a wide-eyed Kansas native, stumbles into the bustling walkways of Times Square with nothing but the dream of marrying a well-to-do bachelor and all the rationality of a modern woman. After charging into a hasty Manhattan man, he gives her the address of a lurchy hotel. It is run by an eerie old woman and filled with struggling actresses. Millie struggles to find work until she earns her place as a stenographer, giving her the opportunity to seduce her affluent boss. She later realizes that she not only crashed into the man from the sidewalk, Jimmy, but also into his heart, and then she must decide between maneuvering love with her brain as a modern woman or falling into a green glass love.

W.T. Woodson High School's staging and production of this musical tapped (literally) into the hearts of viewers. The vocalists maintained an upbeat tone that matched every click of their tap shoes. Creativity beamed from every corner of the stage, from the makeshift elevator to the detailed peacock feather walls of the flapper/jazz lounge. The orchestra beautifully encapsulated every transition making for a smooth flowing show.

Hannah Black's (Millie Dillmount) impressive dance numbers and dazzling vocal solos successfully portrayed the wonderful energy of New York City. But as she tried to forget about the boy, Eric Tysarczyk (Jimmy Smith) had other plans. He practically held the audience's heart in his hands with suspense as he flailed off the ledge of a building for his love. His vocal talent also shined in the second half of the production, beautifully leading the couple to discover what they each needed with love.

Sara Willcox delightfully delivered the villainous and slimy perpetrator of "white slavery" Mrs. Meers. Her hunchback of evil and well done faux elderly voice were highlights to this production. Wilcox also stirred the audience with her red lit solo, "They Don't Know," which nicely gave way to her schemes. Entering her friendship with Millie in a very “princess and the pauper” like mannerism was Marlaina Horewitz (Miss Dorothy). She immediately stunned the audience with her soprano in the duet "How the Other Half Lives," setting the tone for the talent showcased in the rest of the show.

Millie (Hannah Black) and Jimmy's (Eric Tysarczyk) green glass love affair was beautifully illuminated under the glowing moon that adorned the entire set. The flapper dresses and sparkly headpieces added to the glamorous flare of the 20s and the harmonious jazz sax from the orchestra. The Chinese translations for each of Chin Ho (Gin Choi) and Bun Foo's (Dylan Dipasupil) beautiful duets (such as "Muqin," "Not For the Life of Me," and "Ah! Sweet Mystery") were well thought-out, necessary additions to the production on tech's part. Although the vocals of the background ensemble were hard to hear at some points, the show was still strong from the detailed New York skyline silhouette to the sunset mood lighting.

All in all, the stand out dance numbers and impressive orchestra who anchored this production made W.T. Woodson High School's rendition of “Thoroughly Modern Millie” one you won't want to miss.