Supervisor plans on focusing on the environment in upcoming campaign. 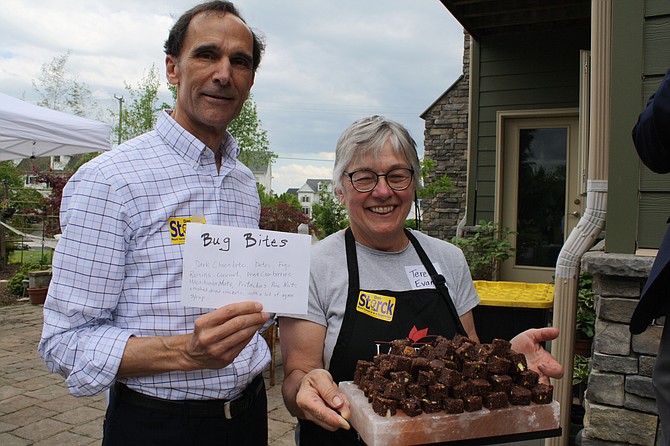 Brownies made with crickets. Photo by Mike Salmon. 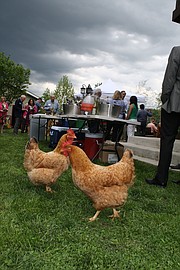 The brownies being passed around at Supervisor Dan Storck’s (D-Mount Vernon) earth day event had an earthy ingredient most did seem to mind, which was insects, earning them the name “Bug Bites.” There was enough sugar and chocolate that the bug taste didn’t come through that strongly, but it provided a recycling theme that Storck wants to take with him in his re-election effort over the next six months. “Real crickets inside,” he said with a smile.

A big point on his agenda is “to address the environmental health of our county,” he said.

He picked the residence of Camela Speer, the communications director in Storck’s office with an environmentally friendly house to hold the Earth Day event. Speer’s house, across the street from the Workhouse Art Center, “blends elements of efficiency and sustainability,” the fact sheet stated. It’s an all-electric house that generates so much solar energy that they sell some back to the company. They have a 1500-gallon cistern for recycling rainwater, hydronic radiant flooring, low reflective argon-filled encasement windows, a bamboo trellis out back, and a couple of chickens for fresh eggs.

Is it possible for others in the county to adopt measures like this? “I know that it is,” said Storck. “Energy efficiency pays for itself,” he added. In his own house, he’s pumped in extra insulation, used bright colored shingles on the roof to reflect heat, and keeps his thermostat down so his electric bill is only about $50, he said.

The Mount Vernon District is bordered by the Potomac River on the eastern edge, and this puts it on ground zero if the sea level rises due to global warming.

“New Alexandria and Belle View would be especially impacted by climate change,” Storck said. The Fairfax Green Initiative is something Storck stands behind, that “lays out the goals that I have to accelerate our efforts towards climate change,” he said. “The Potomac River could rise, the storms, hurricanes, superstorms could be more harmful to the lower areas,” he said.

Inside Speer’s house, “it was our vision,” said Wes Speer. “I was happy to share” the extra energy the house creates with the solar panels and other measures they’ve taken. “No off gassing,” he said, which means the paints and other finishes were not toxic, and the stones used in various places were donated from Vulcan Quarry.

Also at the event was Karen Corbett Sanders from the Fairfax County School Board. She’s worked with the Board of Supervisors on a Joint Environmental Task Force, which Storck is on as well. Vienna resident Helene Shore also attended and has supported Storck on the environment and a group she’s on called “350 Fairfax.” “It’s all grass roots,” she said.