People At Work: Shaman: Working with the Energy of the Body
Votes

People At Work: Shaman: Working with the Energy of the Body 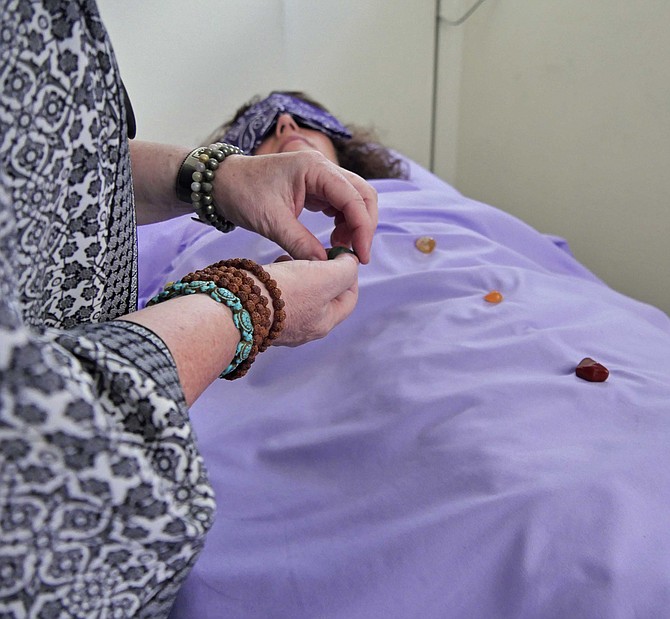 Shaman Deb Heisel begins the ceremony by placing multi-sized and colored stones down the body of her client. Photo by Shirley Ruhe. 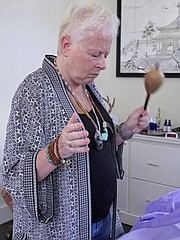 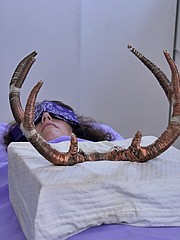 Shaman Deb Heisel begins the second phase of the ceremony by placing deer antlers wrapped with copper on the client's body to help conduct energy to the chakra points.

The door opens in the upstairs room at Sacred Circle on King Street and the sounds of relaxing Native American flute music float through the room. The shaman can feel her guardian angels, animal guides and star systems in the room. "I feel them; their presence is here." She says, “I have a number of clients who can feel them as if they are tuned in."

Deb Heisel has been a practicing shaman and energy healer for almost 15 years. "I needed to heal from suffering depression that was a lifetime task to cure. I had no intention of being a healer. I am my own walking testimony."

Heisel explains to her client she will use a rattle, a drum and stones to open up all of the chakras, lift up the luminous bubble. "This is not a religion; it works with the energy of the body and dates back 50,000 years; it's in every culture." She continues, "A lot of people associate it with Reiki, but I feel it goes deeper." Heisel works with past lives, where parts of the soul have gone into hiding, and seeks to free the person to be what they were intended to be.

She explains the person may feel tingling sensations to almost convulsions to a filmstrip as past lives march by. Floating, nothing, sinking into the table. It doesn't matter. The person may feel nothing on the table but be emotional days later.

The client takes off her earrings, shoes and lies on the table covered with a soft lavender sheet. A bandana is placed over the eyes to block out the light. Heisel sprays a mist of sage back and forth over the table to clear the space so she can begin. The rattle shakes in her hand. "See you at on the other side."

Heisel carefully places rocks of different sizes and shapes in a line up the person's body. In a moment Heisel waves a large feather through the air to open up all of the person's chakra points to clear out the body first before moving into past lives. It takes just a few moments to pull it out. Then Heisel connects with the ankles to show what is going on with the aura. She explains, "There is heavy energy in the feet."

Heisel shuts her eyes and stands still in the room. Back to the rattle. "It is still clearing. I like to do a deep clean and pull healing energy to the chakra points."

The large drum begins slowly … boom boom BOOM "to shake a lot of stuff free that doesn't respond." Heisel’s left hand is raised in the air to bring in the good energy. "You don't want to leave the chakras empty. This takes out the bad and replaces it with a beautiful light." If the body is balanced the energy will come through.

The second part of the ceremony is the trauma timeline ceremony "with all of these old souls to help move through the timeline as quickly as possible so you can get as many swaths as possible."

Heisel waves a smoky quartz over the client's body and places large deer antlers tightly wrapped with copper over the abdomen. "Copper is a good conductor. I just learned about this part of the ceremony several years ago. Guides come in to teach me something for a year and then move on. A lot of people are working right now. Breathe out."

Heisel waves the crystal in circles above the antlers. Fffffft. The wind blows through the room, which helps move the trauma up and out. Heisel strikes a tuning fork and holds the reverberating sound near the person's head to help balance the brain. Finally she shakes the rattle up from the stomach with a final burst. An essential spray ends the ceremony to leave a nice smell at the end.

The person's toes wiggle under the sheet. Heisel brings her back into the room and asks what she has experienced.

"My arms and fingers were so heavy." Heisel says, "You are going deep."

"When you placed your fingers on my body, they were hot like fire. I could feel the energy moving down through my body."

The person stares at the deer antlers. "I couldn't imagine what was on my body."

"I felt ooooooooh I was going up in the air. I had two bodies, one was above me. I fought it because I wanted to keep control." Heisel says, "Your body is floating."

The client added the boom boom BOOM wasn't very pleasant. Heisel says, "It was shaking things loose." Heisel advises the drum takes a lot of stuff out so drink a lot of water. She adds, "Your guardians go out with you and continue to work on you the next few days. Heisel says, "The goal is to give them the healing they are meant to get. I'm just the conduit."