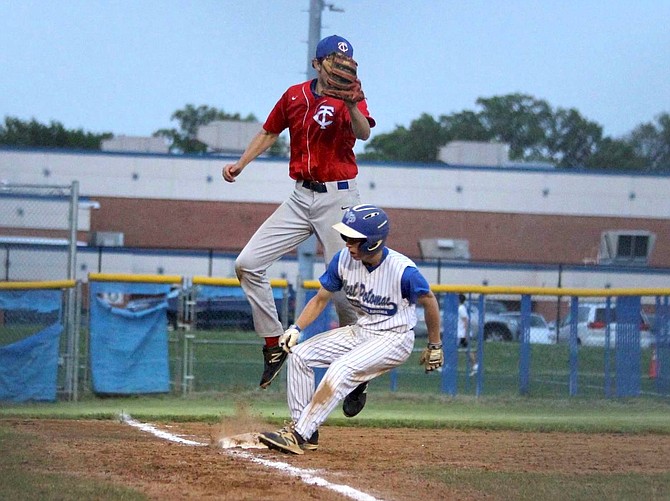 The Wolverines’ Liam Airey pulls into third on a 6th inning hit by Jacob Trumbo. Photo by Lynn Dean/WP Baseball

Wolverine catcher Alex Grove receives the throw from third-baseman Gavin Luscombe in time to nab TC’s Jaden Cox at the plate. This would be as close as the Titans would get to scoring on this night.

The West Potomac baseball team defeated T.C. Williams 9-0 on Friday night, May 17, to claim the Gunston District title for a second straight year. As last year’s actual championship game was rained out though, this was the first time in 31 years that the Wolverines actually got to win the title on the field.

In the game, the Wolverines’ senior right-handed pitcher Jimmy Curley threw a complete game 3-hit shutout, while striking out 15 and walking none. He threw 14 balls in 7 innings for an 81.6 percent strike performance.

The play of the game was in the bottom of the third inning as West Potomac had just taken a 2-0 lead. Jack Bachmore’s hustle on a 2-out grounder to shortstop resulted in an errant throw into the runner which led to a collision, an error, a run scored, and an injury to the Titans’ top player Nathan Keough causing him to have to leave the game. The inning extended, West Potomac tacked on 2 more runs to lead 5-0.

With a record of 15-5, this West Potomac squad has guaranteed itself of being no worse than the second best team in school history as it tries to negotiate a Occoquan Region bracket that will likely have them trying to defeat old Patriot District foes Robinson, Lake Braddock, and West Springfield in succession. These are the same three teams — in the same order — that they beat in 1994 to win the program’s only Northern Region tourney title on their way to the state final that year.