Star-Spangled Salute by The Reston Chorale

Honoring U.S. military members who made the ultimate sacrifice and those who serve. 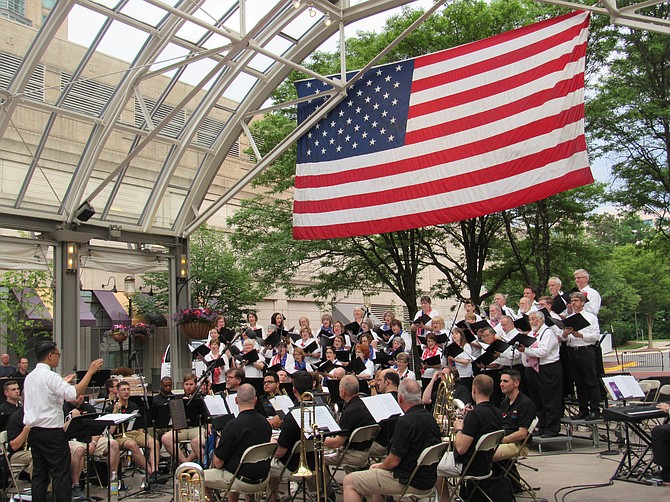 The Reston Chorale directed by Allan Laino, Principal Guest Conductor, and featuring Brass of the Potomac perform during A Star-Spangled Salute 2019 honoring those who served and those who made the ultimate sacrifice. Photo by Mercia Hobson.

On Saturday, May 25 of Memorial Day weekend, The Reston Chorale presented A Star-Spangled Salute, with David B. Lang, Artistic Director, and Allan Laino, Principal Guest Conductor. The Chorale partnered with the Brass of the Potomac, led by Stephen Bull, Conductor. According to the evening's emcee, Andy Sigle, a baritone in the Chorale, the event was to honor the men and women of America's Armed Forces and remember those who gave their lives defending freedom.

Before the performance, The Reston Chorale provided opportunities for the public to support an Air Force unit serving in the Middle East through activities such as making 4th of July cards. Noah Delaune, 8, and brother, Luke, 12, participated as mom, Kelly Delaune lent a hand.

On the other side of the Pavilion, Operation Care Package was underway. Susan Meeks-Versteeg, managing director of The Reston Chorale explained the public could donate snack foods, s' more fixings, light sports equipment and the makings of a Fourth of July celebration. Meeks-Versteeg said when the Commander learned the Chorale adopted his unit and would be sending a large shipment of items; he sent them an email expressing his thanks.

The email read, "Thank you so much. I'm always amazed by the outpouring of support we receive from the home front. We are very grateful." Due to security, Meeks-Versteeg said neither the name of the unit nor the Commander's name could be released.

Sigle welcomed guests to the performance. "Today, we honor the men and women of America's Armed Forces, and we remember those who gave their lives defending freedom … Over the next hour, you'll hear a mixture of patriotic pieces and songs that capture the American spirit, from a great Sousa march to an homage to our home town, Reston," he said.

During the event, the Chorale recognized and thanked service men and women, military families and veterans there that night.

Sigle asked, “As we sing the ‘Armed Forces Salute,’ please stand or wave your flag when you hear your or a loved one’s branch of the service.” Brass of the Potomac played “The Washington Post” by John Philip Sousa.

The performance closed with, "a moment to honor and remember all those who gave their lives for our country," Sigle said. The 24 melancholy notes of “Taps” filled the pavilion, followed by “America the Beautiful.”

On behalf of The Reston Chorale, Sigle thanked Brass of the Potomac and Stephen Bulla for joining them, and Reston Town Center and Northrop Grumman for their support, both for the event and Operation Care Package. He also thanked volunteers and members of the Wayne M. Kidwell American Legion Post 184 Herndon/Reston.

For information about joining The Reston Chorale, Operation Care Package now in effect through June 3, and Gardens of Note, a ticketed self-guided tour of Reston gardens with pop-up musical entertainment with The Reston Chorale on June 1, visit www.RestonChorale.org.