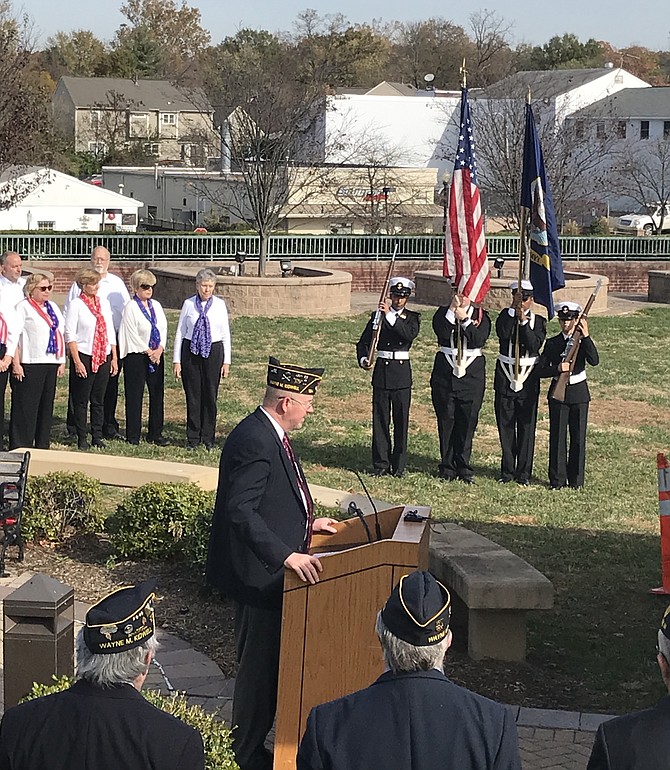 Members of the Reston Chorale prepare to lend their voices to the Town of Herndon and American Legion Wayne M. Kidwell Post 184 Herndon-Reston’s Veterans Day Ceremony. Photo by Mercia Hobson. 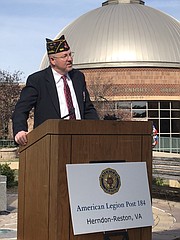 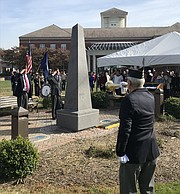 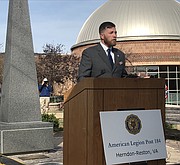 The 2019 Veterans Day Observance in the Town of Herndon held Nov. 11 at 11 that morning, honored all American veterans who served in war or peace, deceased or alive and thanked all in the Armed Forces for their military service. Yet, two veterans present that day who spoke from the podium narrated different stories of different paths each took after exiting the military, "the hardest transition a person can go through,” according to one speaker.

Presented by the Town of Herndon and American Legion Wayne M. Kidwell Post 184, the ceremony honored veterans who died with the laying of the Memorial Wreaths by Post Commander David Womack and Guest Speaker Chris Baity and the sounding of Taps by Post First Vice Commander Bob Thompson. Post Chaplain Donna Pence gave the Invocation and Benediction; she asked for blessing "as we honor all our veterans." Herndon High School Navy Junior ROTC color guard presented the colors and Reston Chorale sang the national anthem. Boy Scout Troop #1570, led by Scott Durham, lent their services to the observance as did the Herndon's Woman's Club, who served refreshments.

WOMACK opened with an admission. Usually quick to "put pen to paper" when writing remarks for the ceremony, this time when he woke up in the morning, he was still at a loss as to what to say. "Then, it struck me. I've been busy. We, in the Post, have been busy. And generally, that comes in three different areas: public awareness, membership and resources,” he said.

Womack said that Post 184 was a small post, just under 200 members on its rolls, but only 10-15 members participated in the monthly meeting. Their mission and vision, though, remained- to help local vets to the best of their ability. Womack described how Post 184 "tries to get the word out on who we are and what we do." He mentioned how the Post attended Town Proclamations, the Homecoming Parade, led this ceremony, and the Memorial Day Ceremony. He said today, not only did members of Post 184, along with volunteers assemble an Avenue of Flags that morning at Chestnut Grove Cemetery in the town; the display this year included 63 veterans' casket flags, which could be viewed dawn to dusk. Post 184 would visit an assisted living center in Reston in the afternoon and present a second Veterans Day Ceremony. "This helps raise public awareness, which supports our next two efforts, membership and resources."

"Membership is important...though not to bolster our numbers…New members bring in different experiences and insights…I would be a fool to think I fully understand what the younger generation who fought in Iraq or Afghanistan are dealing with personally …Younger members do that; they give us the insight to know how to serve better and assist the next generation," he said.

The other part of this effort was resources, Womack said. "Post 184 has some but not a lot." However, the Post was part of a robust veteran support network. "There are multiple groups in and around this area that want to help veterans. Wading through that network can be challenging. We are here to guide and point the way. But many times, that's all you need.” Womack described how this week, Post 184 coordinated with other organizations to assist a local veteran, a single mother of two children faced with eviction. “We are not quite complete with all the actions, but we are close… she will stay in her apartment," Womack said.

Finally, Womack boasted, Post 184 likes to have fun. "We enjoy the camaraderie that comes from military service. It's something we miss. And we so enjoy that camaraderie as a Post, as we are trying to fulfill our vision and mission of supporting veterans. In the end, we couldn't do any of this without this wonderful town," said Womack.

Following the Pledge of Allegiance and singing of the national anthem, Mayor of Herndon, Lisa Merkel spoke. She thanked all for coming and gave a special thank you to the Reston Chorale "for crossing the border today to Herndon to celebrate with us.” Turning to the veterans, she said, "And thank you for your sacrifice."

Next, Womack introduced Guest Speaker, Christopher Baity, U.S Marine Corps dog trainer and Kennel Master with three combat deployments, one civilian deployment and two additional deployments working with dogs. Baity spoke on how he felt humbled to stand before Post 184 and those assembled. He acknowledged the military was stocked with men and women who raised their hand in pledge and kissed their friends and family goodbye to volunteer for military service. He said he stood on the shoulders of giants and learned from veterans in all branches of the service and around the world – Airmen from Lackland Air Force Base, where most military dogs, working dogs and handlers were trained; Navy Corpsmen and the Army Corps of Engineers, the unheralded heroes who operated in the dark… to make sure no one stepped on, walked through or triggered enemy booby traps.

"These people enter and exit your life at will, and all who entered my life left an impression on me… willing to sacrifice their time, their safety and potentially their life to be part of the finest fighting forces our history has ever seen," Baity said.

VETERANS DAY, Baity continued, was meant to celebrate all veterans who served. "Exiting the military has to be the hardest transition a person can go through. Subtract a positive support system. There is no doubt to reasons for high suicide, high incarceration and drug addition rate(s)…I myself struggled with some of the challenges veterans for all eras suffered." Hope existed for those struggling Baity said: "It is in the voices of our community, people and organizations making a difference by tackling a problem within their reach. Organizations like the one I founded…Semper K9 Assistance Dog. We have seen the community rally behind our cause, an army of volunteers that supports our mission, providing custom trained service dogs to disabled veterans…who sacrifice their time, using their talents to assist wounded veterans."

Baity said that at Semper K9, they celebrate civilian volunteers on Veterans Day as they, too, are included in the recovery and success of veterans they serve. He urged those present to celebrate all who support veterans, whether they served in the military or not. "At Semper K9, our mission is to enhance the quality of life of veterans, veterans who struggled as I did; they need your support and so do their families. Help me transform lives and strengthen the community. Be involved. Make an impact, and you will make a difference," said Baity.