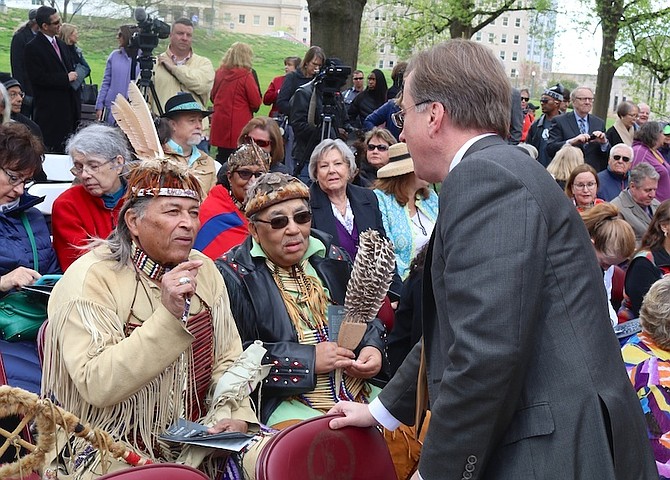 Del. Paul Krizek speaking with Virginia Chiefs at the dedication of the Mantle, a Native American monument on the grounds of the Virginia State Capitol.

November is Native American Heritage Month: dedicated to celebrating the rich and diverse cultures and traditions, and to acknowledge the important contributions, of Native people throughout the country.

It is especially meaningful to me personally as general counsel of Running Strong for American Indian Youth, a Native American-led charity headquartered right here on Richmond Highway in Mount Vernon, and also as a Virginian, home to the first Native people to encounter the European colonists on our shores.

However, in my conversations with local Virginia tribal leaders, they decided that celebrating Indigenous Peoples’ Day the day before Thanksgiving is the best way to recognize Virginia tribes and their historic and current contributions to our Commonwealth.

The lands that would later become known as Virginia have always been home to indigenous people, with an estimated population of 50,000 comprising at least 15 separate nations prior to the arrival of the English settlers.

Below I have listed the 11 state-recognized tribes in Virginia. The first seven tribes below are also federally recognized.

Nansemond (Cities of Suffolk and Chesapeake)

Each year on Indigenous Peoples’ Day in Virginia, a ceremony as part of a peace treaty from 1677 continues to this day in which leaders of the Mattaponi and Pamunkey tribes deliver their traditional tax payment to the Governor on the grounds of the State Capitol in Richmond, usually a couple of deer and a turkey.

“Keeping the treaty keeps our people involved in their culture,” said Pamunkey Tribal Chief Robert Gray at the 2017 ceremony that dates back 340 years. In 2017, the bucks were presented to then-Gov. Terry McAuliffe.

“We’re really here to celebrate what we call the original Virginians – those that were here many, many, many years ago,” said McAuliffe during the ceremony.

Knowledge of the history of Native Americans is essential to understanding our history. Their story is the origin story of Virginia and America, yet so few Americans know much about them.

I hope that you will consider visiting the Capitol in Richmond in front of the Governor’s mansion on Indigenous Peoples’ Day, the day before Thanksgiving, to witness this important tradition going back centuries and predating the establishment of our nation.