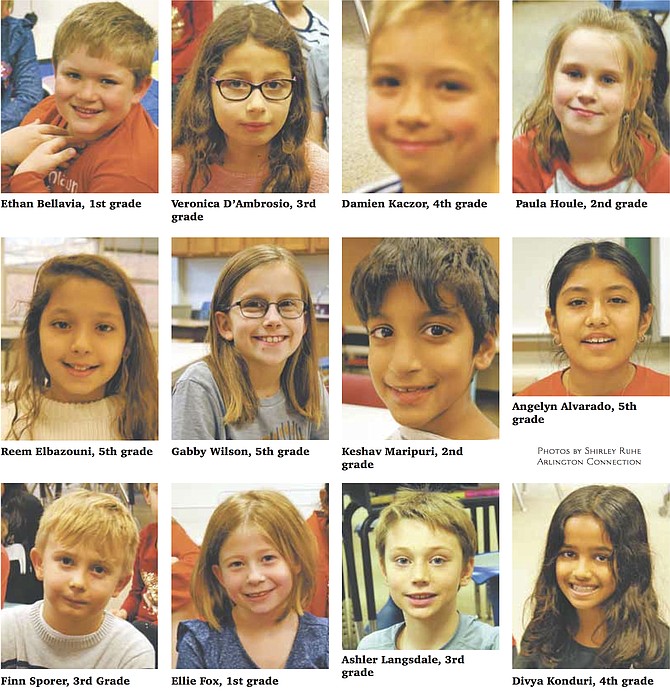 Seventeen students at Ashlawn Elementary from 1st-5th grade gather with Principal Breonna McClain on Friday, Nov. 22 to talk about what Thanksgiving means to them.

What are you grateful for at Thanksgiving? Hands shoot up in the air.

The majority of the students said they are most grateful for friends and family. But in the case of Sanam Chokshi, family means her mom and dad and six brothers. "I'm the only girl."

And for Reem Elbazouni, it means her mom and dad, two brothers, 2 guinea pigs, 2 kittens and one bunny.

Veronica D'Ambrosio says she is grateful for having a roof over her head "because everyone doesn't."

And Keshav Maripuri is grateful "for being on this planet."

Most of the students are visiting family or friends nearby or having cousins, aunts, uncles and grandparents come to their homes.

But Selis Yavus says, "My grandparents live less than a block away and I get to see them all the time."

Paula Houle says, "We usually go to my grandparents in Juno Beach, Florida where we help my grandparents volunteer at turtle rescue, but this year we are going to Portugal."

Ellie Fox is going to Jacksonville, Florida to see her cousins and aunt and uncle.

Keshav Maripuri is getting on a plane to visit his cousins in St. Paul. "Traveling is my favorite part this year."

Turkey is on the menu at most houses, but not necessarily the traditional roasted bird.

Finn Sporer says, "We make a turkey shape on a plate out of figs and all kinds of mixed fruits with blueberries for eyes."

Ellie says, "My grandpa goes to a bakery and gets a turkey made out of chocolate stuffed with chocolate popcorn. It's really delicious."

Anise Smith says they have volcano-shaped mashed potatoes where you pour gravy on the top and it squishes out when you dig in.

Reem says her mother thinks a turkey is way too big, so they have chicken instead.

Gabby Wilson says they go out to eat and usually have fish because her father is allergic to turkey.

Veronica D'Ambrosio says they have vegetable potpie because "Our family likes to go vegetarian when we can."

What about dessert? Aura Lambe Morales says they have lava cake and flan, a Mexican dessert.

Pamela Pool says, "We have two pies. I make the chocolate and my 11-year-old sister makes a pumpkin."

Selis says her mom and grandmother split the dinner and her grandmother makes the pies while Angelyn Alvarado doesn't usually have pie because she doesn't like it.

Reem sometimes helps her mother make the dinner and they have pumpkin pie.

Holiday entertainment extends from Divya Konduri playing board games at her friend's house to Ethan Bellavia watching a Thanksgiving movie and Damien Kaczor watching football. He says the Rams and Redskins are his favorite teams.

Sanam Chokshi volunteers she watches the Macy's Thanksgiving parade because it's fun or a favorite activity is hanging out with friends.

Veronica says, "there are so many things that I love. This year it will probably be just celebrating in my new house."

Ayane Mitzutani says they don't celebrate Thanksgiving. She and her dad play tennis after lunch, and she just started with Washington Ballet this year. Their performance is on Thanksgiving Day.

Ashler Langsdale sums it up when he says he likes it "because I wake up and then it's a weekend."